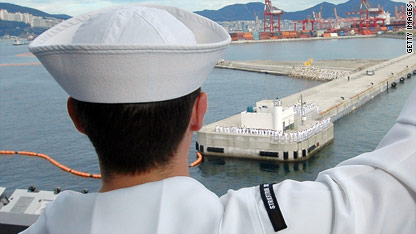 The 14th Navy commanding officer to be fired this year was relieved of his post this week.

The U.S. Navy has fired 14 commanders so far this year for offenses including soliciting prostitution, having inappropriate relationships with other officers, and dereliction of duties that led to ship collisions, spokesman Lt. Justin Cole said.

Though 14 may seem a high number of commanders to be fired within a nine-month period, Cole said the Navy dismisses an average of 15 commanders each year. There are 1,500 commanding officers in the service, said Cole.

"All of the cases are different. Some years, we see more reasons involving ship collisions or some years that trend toward bad behavior," he said. "There's no way to say it's because of one thing or another, or that there's something unusual going on this year.

"It's just unfortunate when we have people who aren't meeting the high standards the Navy sets," he added.

The latest to be dismissed is Capt. David Solms, who was fired Tuesday night for "inappropriate personal behavior," Cole said.

Solms was in charge of the Trident Training Facility, in Bangor, Washington. William Kenny, a Trident¬Ýspokesman, said he would not elaborate on details of¬Ýthe case, but added that Solms has been temporarily assigned to another post in the Northwest region.

Cole also declined¬Ýto elaborate on the details of Solms' case, but said it had gone through an investigative process. "An action to dismiss a commanding officer comes after much examination, months sometimes of closely looking at evidence and circumstances," he said.

Cole confirmed for CNN the circumstances of the 13 other firings this year,¬Ýreported by the Navy Times this week.

AstraZeneca is pushing back strongly against criticism from EU officials over delayed deliveries of its Covid-19 va‚Ätwitter.com/i/web/status/1‚Ä¶IK
cnni

6:16 am ET January 27, 2021 RETWEET
The only surviving prototype of this unusual plane now sits dilapidated in a field near Moscow, but it was once the‚Ätwitter.com/i/web/status/1‚Ä¶dg
cnni

6:01 am ET January 27, 2021 RETWEET
Apple is urging iPhone and iPad users to promptly update their operating systems to fix security bugs that may have‚Ätwitter.com/i/web/status/1‚Ä¶E6
cnni

5:45 am ET January 27, 2021 RETWEET
Sanofi will fill and pack millions of doses of Pfizer's Covid-19 vaccine from July in an effort to help meet the hu‚Ätwitter.com/i/web/status/1‚Ä¶aQ
cnni