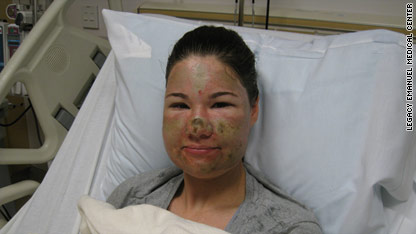 A Washington woman who told police that a stranger threw acid in her face admitted Thursday that her injuries were self-inflicted, authorities said.

Bethany Storro, 28,Â told Vancouver Police that an African-American woman passed her on the street and threw a cup of caustic liquid in her face the evening of August 30. She was released from an Oregon hospital on September 5 after undergoing surgery for her injuries after the alleged attack.

"Ms. Storro admitted her injuries were self-inflicted and the attack itself had not occurred as she had previously reported," he said.

Storro had credited a pair of sunglasses that she bought shortly before the attack with saving her eyesight. But details such as those led police to question her version of the attack, said police Commander Marla Schuman.

"It was all the little things that didnt quite add up," Schuman said.

Storro is still being interviewed by detectives. Prosecutors will decide whether to charge her, Schuman said.

"She is extremely upset," Schuman said. "She is very remorseful. It got bigger than she expected."

10:55 am ET October 17, 2021 RETWEET
Poetry is finding new prominence in today's mainstream collective imagination, thanks to the rise of writers includâ€twitter.com/i/web/status/1â€¦Zc
cnni

10:45 am ET October 17, 2021 RETWEET
The 'CITGO 6' oil execs, who were being held in Venezuela, were picked up by the country's forces hours after Alexâ€twitter.com/i/web/status/1â€¦ML
cnni