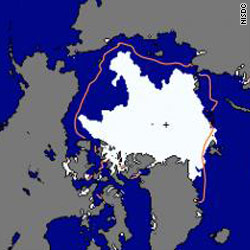 This image shows the changing size of ice in the Arctic.

There was less sea ice in the Arctic only during the summers of 2007 and 2008, the National Ice and Snow Data Center at the University of Colorado reported.

Researchers think higher global temperatures attributable to human-produced greenhouse gases in the atmosphere are responsible for the low amount of ice, according to the NISDC report.

The sea ice reached its summer minimum on September 10 at 1.84 million square miles, NISDC researchers said. While that amount is 240,000 square miles above 2007’s record low, it is still 130,000 square miles less than was seen at the 2009 minimum, said Mark Serreze, a University of Colorado geography professor and director of the NISDC.

"We are still looking at summers with an ice-free Arctic Ocean in perhaps 20 to 30 years," Serreze said.