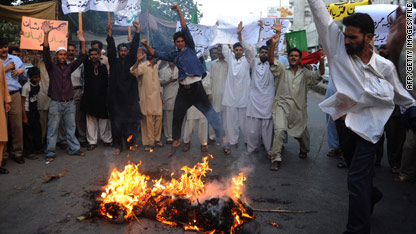 Muslims burn an effigy of cartoonist Molly Norris in Karachi, Pakistan, on May 26.

A cartoonist for Seattle Weekly in Washington state is in hiding after she received death threats for mocking the Prophet Mohammed five months ago, the newspaper reported.

The alternative weekly’s editor in chief reported this week that artist Molly Norris is “going ghost” on the advice of FBI security specialists. She will be moving and changing her name, Mark Fefer wrote.

“You may have noticed that Molly Norris’ comic is not in the paper this week. That’s because there is no more Molly,” he said. “She is, in effect, being put into a witness-protection program – except, as she notes, without the government picking up the tab.”

Norris’ hasty exodus stems from an April controversy in which the creators of “South Park” saw their 201st episode censored over its inclusion of Mohammed as a character. Creators Matt Stone and Trey Parker received death threats because their 200th episode featured the Muslim prophet in a bear suit.

Norris dedicated her cartoon that week to Stone and Parker and attacked bloggers at Revolution Muslim, who she said made threats against the “South Park” masterminds. Couching the cartoon as a First Amendment protest, she accused the Comedy Central network of cooperating with terrorists for pulling the original episode.

(Revolution Muslim's organizers told CNN in April the blog post - which said Parker and Stone would "probably wind up like Theo Van Gogh," the Dutch filmmaker stabbed to death after releasing a film about the oppression of Islamic women - was a call to protest, not violence.)

Norris announced that May 20 would be “Everybody Draw Mohammed Day!” above a cartoon of a cherry, domino, handbag, cup of coffee, spool of thread and box of pasta arguing over who was the “REAL likeness of Mohammed.”

But by the time May 19 rolled around, Norris had been overwhelmed with the attention surrounding her tongue-in-cheek proclamation. Tens of thousands of people took to Facebook to lambaste her, similar numbers jumped to her defense and Pakistan blocked access to the social-networking site until the furor subsided, according to The Big Blog, a cultural offering from the Seattle Post-Intelligencer.

“It's been horrible,” Norris told the blog, explaining she had lost seven pounds and spent previous weeks issuing apologies and talking with national media. “I'm just trying to breathe and get through it.”

The controversy didn’t pass after the fictional holiday. On July 11, The New York Daily News reported that Yemeni-American cleric Anwar al-Awlaki – who has been linked to the Fort Hood massacre and the botched May 1 bombing in Times Square – called for Norris’ assassination.

In the July issue of al Qaeda’s Inspire magazine, which included an article on how to “make a bomb in the kitchen of your mom” by the AQ Chef, al-Awlaki called for Norris and others to be executed for their “blasphemous caricatures.”

“The medicine prescribed by the Messenger of Allah is the execution of those involved,” The Daily News quoted al-Awlaki as writing.

The FBI told the newspaper the threat was serious and said it was working with the targeted individuals. On Wednesday, Seattle Weekly reported Norris had gone into hiding.

Fefer wrote that Norris likened the development to cancer: “It might be urgent and serious, it might go away and never return or it might pop up again when she least expects it.

“We’re hoping the religious bigots go into full and immediate remission, and we wish her the best.”