Huawei CFO Meng Wanzhou pleaded not guilty to US charges against her. She and the DOJ reached a deferred prosecutioãtwitter.com/i/web/status/1ãÎcX

After several days of living in squalid conditions under the Del Rio International Bridge in Texas, the last remainãtwitter.com/i/web/status/1ãÎUV

The House passes a bill aimed at preserving the right to abortion in a nearly party-line vote. It is not expected tãtwitter.com/i/web/status/1ãÎpc 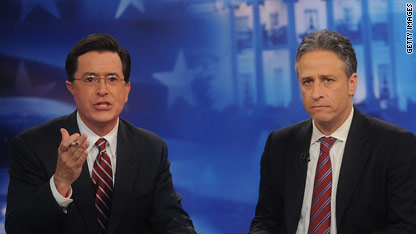 Announcements from popular Comedy Central fake news hosts Jon Stewart and Stephen Colbert that they plan to stage rallies in the nation's capitol on October 30 has the rumor mill buzzing over whether it's all a big joke. For now, fans of the funnymen seem content to muse over the names of the events - "Rally to Restore Sanity" and "March to Keep Fear Alive" - and their not-so-subtle references to the political rally staged last month by Fox News host Glenn Beck.

Bethany Storro captured the nation's sympathy and stoked fears of copycat attacks when she called police to report that an African-American woman threw a cup of acid in her face. Her admission that sheô made up the story and is in fact responsible for mutilating her own face hasô prompted the collective consciousness of the Web to offer up opinions on why she said her attacker was African-American and whether she should face charges.ô The decision rests in the hands of prosecutors in Washington state.

Happy Yom Kippur, or, as we Jews know it, the day we fast to atone for our sins and cleanse for the year to come. From lists of the top 10 foods we can't wait to eat and what not to read on Yom Kippur, to cures for your Yom Kippur headache, the internet is brimming with suggestionsô on how to make it through one of Judaism's holiest days.

Officials on the Spanish island of La Palma have ordered more evacuations on the sixth consecutive day of eruptionsãtwitter.com/i/web/status/1ãÎ6Z
CNNweather

5:03 pm ET September 24, 2021 RETWEET
Hurricane Sam is a small storm but a mighty one. It's expected to become a major hurricane and could near islands iãtwitter.com/i/web/status/1ãÎeV
CNNweather

2:37 pm ET September 24, 2021 RETWEET
The climate emergency is killing the countryside that inspired Sleeping Beauty. Itãs not the only crisis facing Getwitter.com/i/web/status/1ãÎ5W6x
CNNweather