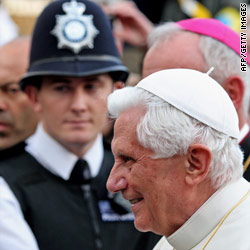 Police say they have released six men arrested in connection with a possible attack on the pope.

Six men arrested on suspicion of being terrorists during Pope Benedict XVI's visit to the United Kingdom have been freed without charges, Scotland Yard spokesman Alan Crockford said Sunday morning.

The men were arrested under the Terrorism Act 2000, which allows police to hold them without charge for 28 days. Searches were carried out at a business in central London and at residential locations in north and east London, police said.

Five of the men were street cleaners for Westminister City Council, the borough of London that includes Parliament, Westminster Abbey and many of the city's tourist attractions, the council said.

They work for one of Westminister's contractors, Veolia Environmental Services, the council said.

Five of the men were arrested early Friday at a business on suspicion of the commission, preparation or instigation of acts of terrorism, police said. A sixth man was arrested later that day.

1:32 pm ET April 11, 2021 RETWEET
RT @CNNSotu: CNNâ€™@jaketapperer on the legacy of the Civil War 160 years after it began: "In some parts of the country and in the hearts andâ€¦
sarasidnerCNN