[Updated at 8:05 p.m.] Winds and rain associated with Hurricane Igor lashed Bermuda on Sunday ahead of the storm's arrival, forecasters said, as the island braced for a potential direct hit.

The official weather-observing site on Bermuda reported sustained winds of 61 mph (98 kph) with a gust to 76 mph (122 kph), above hurricane force, the National Hurricane Center said. A gust of 89 mph (143 kph) was earlier reported at an elevated observation site.

As of 5 p.m. ET Sunday, Igor's center was about 85 miles (135 kilometers) southwest of Bermuda and moving north at about 15 mph (24 kph). The storm was a Category 1 hurricane, with maximum sustained winds of 80 mph (130 kph), but forecasters said its intensity was not expected to diminish further before it approached Bermuda.

[Original post, 11:31 a.m.] Bermuda was experiencing hurricane-force wind gusts on Sunday ahead of the arrival of Hurricane Igor, which could make a direct hit on the island.

Stronger winds are yet to come as Igor inches closer, the National Hurricane Center said. Tropical storm conditions and squalls had already been reported on Bermuda.

As of 11 a.m. Sunday, Igor was about 135 miles (220 kilometers) south-southwest of Bermuda and moving north at about 16 mph (26 kph), the hurricane center said. The storm was a Category 1 hurricane, with maximum sustained winds of 85 mph (140 kph), but "Igor is expected to remain a dangerous hurricane as it moves near or over Bermuda," the hurricane center
said.

The leader of Sweden's opposition coalition conceded defeat Sunday night, marking a historic moment as a non-socialist government appeared headed for re-election to a second term for the first time in the country's political history.

Swedish Prime Minister Fredrik Reinfeldt's centre-right four-party coalition - consisting of the Moderates, the Liberals, the Christian Democrats and the Centre party - appeared poised to hold on to power, judging by early and preliminary election results.

END_OF_DOCUMENT_TOKEN_TO_BE_REPLACED

Pope Benedict XVI praised Britain Sunday for standing up to the Nazis, a remark that could rekindle controversy over the pope's past - reminding listeners that he was forced as a young man to join the Hitler Youth.

Describing himself "as one who lived and suffered through the dark days of the Nazi regime in Germany," the German-born pontiff said it was "deeply moving... to recall how many of your fellow citizens sacrificed their lives, courageously resisting the forces of that evil ideology."

END_OF_DOCUMENT_TOKEN_TO_BE_REPLACED 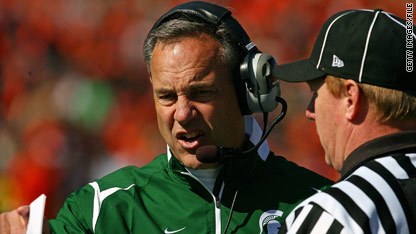 Michigan State coach Mark Dantonio is expected to remain in a hospital for a few days.

[Updated at 6:27 p.m.] Michigan State football coach Mark Dantonio is expected to recover fully from a heart attack that he suffered shortly after his team's trick-play overtime victory against Notre Dame, a cardiologist who treated him said at a news conference Sunday.

"We found one of the vessels that feed blood to his heart muscle to be closed," and D'Haem used a stent "to hold the vessel open and re-establish blood flow to the heart muscle," the doctor said.

END_OF_DOCUMENT_TOKEN_TO_BE_REPLACED

U.S. officials formally declared an end to the worst oil spill in U.S. history Sunday, a milestone that followed nearly five months of dashed hopes and blistering criticism of nearly everyone involved. 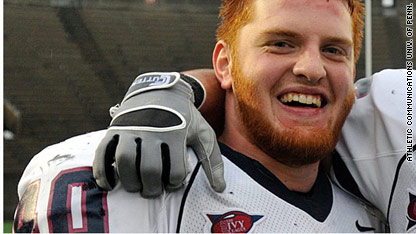 ¬†At least two high school football players have died on the field this month, while an autopsy on a college player¬†who committed suicide revealed a type of brain damage typically seen in retired or aging athletes.

On Friday, a 17-year-old starting quarterback in at West Orange-Stark High School in Orange, Texas,¬†collapsed on the sideline after throwing a touchdown pass. Reggie Garrett¬†was considered to¬†have much potential¬†for college ball and¬†had an offer to play for Iowa State and interest from¬†other Division I schools,¬†a local coach told the Houston Chronicle.

Earlier this month, a football player with Wekiva High School in Apopka, Florida, collapsed on the field during practice and died after being taken to a hospital, the Orlando Sentinel reports. Ninth-grader¬†Olivier Louis was 15. The paper says a memorial service is planned for September 25. Autopsy results are expected soon.

A newly released autopsy on a University of Pennsylvania football player who committed suicide in April revealed¬†he had chronic traumatic encephalopathy, which can cause poor decision-making, impaired memory, erratic behavior, depression and suicide. Read CNN.com's FULL STORY on Owen Thomas.

Hiker detained in Iran is back in U.S. 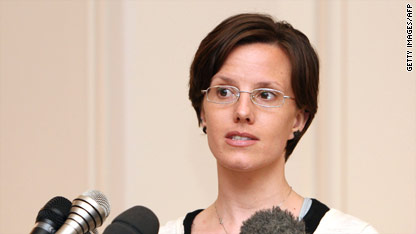 [Updated at 7:33 p.m.] Sarah Shourd, the American hiker released from an Iranian prison, told reporters in New York on Sunday that doctors in Oman have assured her that she is "physically well."

Reading from a prepared statement, Shourd expressed thanks to Iranian government and religious leaders, including Ayatollah Ali Khamenei and President Mahmoud Ahmadinejad, for her release after 410 days.

"It is my deepest hope that the world will not let this humanitarian gesture ... go unrecognized," she said. "I believe this decision is a step in the right direction for all of us."

END_OF_DOCUMENT_TOKEN_TO_BE_REPLACED

A group of 13 Salvadoran immigrants missing in southern California amid fears that they planned a cult-like mass suicide have been found alive, a sheriff's spokesman said Sunday.

Authorities had been scouring the Palmdale area of northern Los Angeles County on horseback and by helicopter Sunday in search of the group, which included eight children between the ages of 3 and 17, said Steve Whitmore, a spokesman for the Los Angeles County Sheriff's Department. A resident spotted one of the vehicles identified in the lookout and notified the sheriff's department, he said.