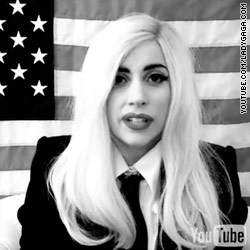 A rally Monday afternoon in Portland, Maine, is the latest effort by Lady Gaga to get the Pentagon's "don't ask, don't tell" policy repealed. The law bars gays from openly serving in the military. The artist has used her Twitter account, which to date has 6.4 million followers, to raise awareness. Here's a look at some of her other efforts:

September 14, 2010 – The singer challenges her Twitter followers to contact Senate Majority Leader Harry Reid about calling a vote on the ban to the Senate floor. Reid quickly responded on Twitter that a cloture vote on the bill that includes language about the repeal would happen this week. It is now slated for Tuesday.

September 17, 2010 - Gaga posts a seven-minute plea on YouTube calling for an end to the ban. To date, it's been viewed nearly 1.5 million times. She also urges her followers to post video blogs sharing their thoughts on DADT, which she will share with her online community as well.

The host of HBO's "Real Time with Bill Maher" alerted viewers - and Christine O'Donnell - that there may be more YouTube moments ahead for the Republican Senate nominee from Delaware.

It turns out that O'Donnell appeared on Maher's previous program, ABC's "Politically Incorrect," 22 times in the mid-1990s. At the time, O'Donnell was the spokeswoman for a conservative women's movement . She was also founder of an organization called "The S.A.L.T.," which stands for The Savior's Alliance for Lifting Truth.

During Friday night's program, Maher showed viewers the now highly publicized clip from 1999 in which O'Donnell tells Maher and three other panelists that she had "dabbled in witchcraft." "If you're watching, Christine — I created you," Maher prodded. "If you don't come on this show, I'm going to show a clip a week — I'm the only one who has them."

He then makes reference to a clip posted on YouTube last week, in which O'Donnell insists no one should tell a lie. When fellow panelist Eddie Izzard asks her whether she'd lie to Nazis about hiding Jews, O'Donnell implies she would not, adding, "I believe God would provide a way to do the right thing right then."

It's like a hostage crisis," Maher warned O'Donnell on Saturday night. "Every week you don't come on this show, I'm going to throw a new body out."

He served the Republican establishment by advising Ronald Reagan and John McCain and helped to take down Democratic California Gov. Gray Davis. So why is Republican strategist Sal Russo targeting GOP moderates by raising millions for the Tea Party Express?

In an article featured in Monday's Los Angeles Times, some grass-roots members of the movement say they're suspicious of the longtime political insider. Despite any doubts, his ads and efforts have been successful.

Russo runs the Express political action committee out of his Sacramento, California-based firm, the Times reports. The paper adds that the PAC has helped in the following ways so far:

- spent $236,000 in television and ads for Christine O'Donnell in Delaware;

"A lot of these tea partyers are extremely frustrated Americans who are new to politics," Sacramento attorney Steve Merksamer told the Times. "[Russo is] a talented political operative who has been doing this a long time."