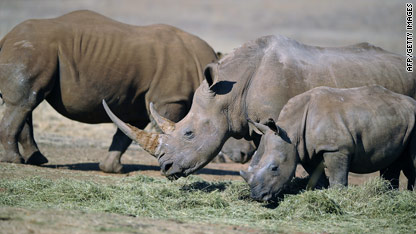 A total of 204 rhinos have reportedly been killed in South Africa this year.

Nine suspects in a major South African rhino poaching ring are due in court Wednesday after arrests Monday that targeted the leaders of a syndicate that sent the horns of the animals to the international black market, media reports said.

Among those arrested were two veterinarians who were believed to be the masterminds of the ring, according to a report from South Africa's Eyewitness News.

A game farmer and a dehorning specialist were also arrested Monday. Further arrests are expected, police said. "The arrest is a huge breakthrough. It came at the time when we are experiencing a huge outcry by our communities ... about rhino poaching," national police spokesman Vishnu Naidoo told the South African Broadcasting Corp.

A total of 204 rhinos have been killed in South Africa this year, SABC reported, including five in the past week.

That compares to 122 rhinos killed in all of 2009. According to South Africa's Kruger National Park, there were an estimated 19,409 white rhinos and 1,678 black rhinos in the entire country at the end of 2009.

Rhinos are sought for their horns, which are ground into powder and used in traditional Asian medicine, with China, Taiwan and South Korea being the major markets, according to the World Wildlife Fund. Full horns are also prized as dagger handles in Yemen.

The suspects' court appearances Wednesday will coincide World Rhino Day, sponsored by the WWF and allied organizations to bring attention to the plight of the rhinoceros. The group is seeking monetary donations and asking people around the world to blow their vuvuzelas at 1 p.m. Wednesday to show their support for the animals and for law enforcement agencies and park rangers trying to protect rhinos from poaching.