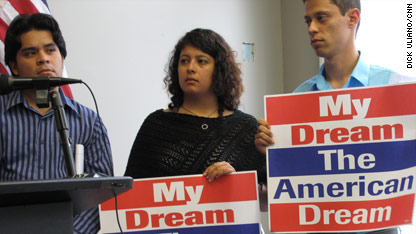 When Senate Majority Leader Harry Reid said he would be introducing the DREAM Act and a “don’t ask, don’t tell” repeal as amendments to the defense authorization bill it sent shockwaves through political and immigration circles. Before those two additions can be voted on, the Senate must agree to close debate on the larger defense bill - something that may not happen.

GOP senators, in addition to frustrations with the possible “don’t ask, don’t tell” repeal, also dislike Reid's plan to add the DREAM act, an immigration-related provision to the defense bill.

The DREAM Act would create a path to citizenship for illegal immigrants who entered the United States as children. Under the bill, an individual would have to be of “good moral character” and either receive a college degree or complete at least two years of U.S. military service. Yahaira Carrillo is a college student who, while in high school, participated in Jr. ROTC, while dreaming of becoming a United States Marine.

“I wanted to be in uniform,” she told CNN, but she quit ROTC when a Captain-classmate warned that her undocumented status would bar her from joining the Marines.

The 25-year-old college senior is currently in deportation proceedings, but if the Dream Act became law she could earn U.S. citizenship.

“This is where I want to be.” Carrillo told CNN’s Dick Uliano. “I want to be here. I don’t want to be anywhere else.”

Or you can also listen to the CNN Radio Reports' podcast on iTunes or subscribe to the podcast here.