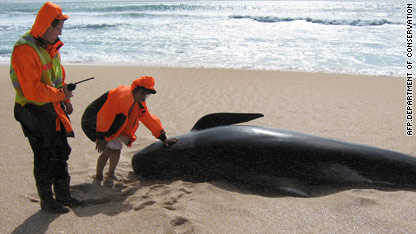 As many as 74 pilot whales have beached themselves in northern New Zealand in the second mass stranding in the area in two months.

Rough seas and gusting winds are pushing the whales into rocks causing injuries that may force authorities to euthanize many of those that rescuers can get on the beach, said Patrick Whaley, operations manager for New Zealandâ€™s Department of Conservation. Others are drowning in the surf along the remote beach in Spirits Bay.

â€śItâ€™s heart-wrenching to have to see so many whales coming ashore and then drowning in the surf, without being able to reach them in time,â€ť Whaley said.

Rescuers had managed to get eight of the whales above the high surf line and were planning to care for them on the beach overnight with hopes of returning them to the ocean in the morning, said Carolyn Smith, a Department of Conservation spokesperson.

At least 25 whales had died. Officials fear dozens of other whales may be in danger just offshore.

In August, 49 pilot whales died after stranding themselves on a beach at Karikari, also in New Zealandâ€™s far north. Nine were saved during that stranding.

Whatâ€™s behind the whale strandings remains a mystery. Theories include a herd behavior, where one animal gets in trouble and others follow, fleeing predators, beach formations that confuse the whales echo-location senses, or possible interference from human sonar.