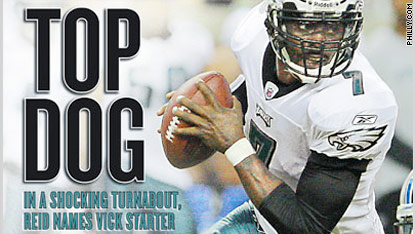 The Philadelphia Daily News went with a tongue-in-cheek headline Wednesday.

Michael Vick is sure to be the subject of controversy again, but this time it's not the fleet-footed Eagles quarterback's fault.

On the front cover of Wednesday's Philadelphia Daily News, Vick is featured - rolling out of the pocket, pigskin in hand - alongside the caption, "Top Dog." The story details a "shocking turnabout" in which Eagles coach Andy Reid named Vick the team's starting quarterback.

In case you've been in a sports vacuum on one of Neptune's moons for the last two years, Vick returned to the gridiron last season after serving an NFL suspension and prison time for a felony dogfighting conviction.

The Eagles' decision to sign Vick to a modest contract was met with mixed reaction from animal-rights activists, and this week's announcement was no different. The founder of the animal-welfare organization DogPAC told The Philadelphia Inquirer the move was "disappointing," However, Wayne Pacell, president of the Humane Society of the United States, said Vick was committed to his group's anti-dogfighting initiative and that Vick told him he'd be available Tuesdays to talk to at-risk youth about dogfighting.

A People for the Ethical Treatment of Animals news release said only, "As long as he's throwing a football and not electrocuting a dog, PETA is pleased he is focused on his game."

Josh Barnett, the paper's executive sports editor, said the Daily News had received "a few calls and some e-mails" about the headline, "almost all being from people who are animal lovers."

"The general consensus is they feel like the issue's been covered and he's paid his debt to society with prison time, and the story should be more focused on football," he said.

Barnett defended the paper's coverage of the issue, saying it was balanced and that several sources addressed Vick's remarkable comeback and how the 30-year-old had made the most of his second chance.

As for the headline, Barnett said it is "reflective of our personality." He said there was no intention to offend anyone, only to "write the best, most reflective headline out there."

"It really is not a stark departure from what we do and what we've always done," Barnett said.

This, after all, is a newspaper that warned "Hide Your Dogs" on its front page when the Eagles signed Vick. When the Eagles banned outside food in their new stadium the paper decried "Hoagies of Mass Destruction." It has also skewered non-sports figures: When in 2000 then-Mayor John Street announced his support for Police Chief John Timoney following a nationally televised police beating, the Daily News depicted the pair as Jackie Gleason and Art Carney under the headline, "The Honeymooners."

Several blogs promised Wednesday's Vick cover would yield controversy. But Philadelphia is a rabid sports town, a place where Santa Claus was once pelted with snowballs, where fans cheered after Dallas Cowboy Michael Irvin suffered a career-ending neck injury, where hometown hoopster Kobe Bryant was booed during the just-for-show NBA All-Star Game. Here, the controversy seemed to lie in Reid's decision more than the newspaper's front page.

Reid has repeatedly said - as recently as Monday - that Kevin Kolb would remain the Eagles' starting quarterback and there was "no indication there was any wiggle room in that," said Barnett, explaining why the story carries such weight in the City of Brotherly Love. The Vick announcement, essentially, "is uncharacteristic of Andy Reid," he said.

While most of those commenting on the newspaper's website attacked Reid's credibility and a handful defended "Con-Vick," there were a few commenters who took issue with the paper's headline, describing it as tasteless and tacky.

Asked one: "does anyone know where the editor of the [Daily News], Andy Reid, and Vick the "dog Killer" live? We can get a pumpkin tosser and toss bags of meadow muffins at their houses!"

"Top Dog?" asked another. "You have reached a new low. How about animals protect their young, he's nothing more than a savage, you insult dogs everywhere."

Some took a lighter approach, though, and went along with the gag. A blog post on SB Nation added a few puns of its own, including jokes about how Vick treats "underdogs" and about an upcoming game turning into a "dogfight."

"Sure, a wide swath of America can't talk about Vick without making a dog joke," Andrew Sharp blogged. "But guess what? Two years after one of the more startling falls from grace we've seen in pro sports, we're all talking about Vick again. All jokes aside, that's pretty amazing."

Asked if the newspaper - whose parent company filed for bankruptcy last year - was attempting to draw attention ahead of the Daily News, The Philadelphia Inquirer and philly.com being placed on the auction block Thursday, Bjork said the headline was purely an editorial decision.

"This is the sort of thing we would cover anyway because we're such a big sports town," she said.

Asked which he thought was a bigger story, Barnett said "sports is so much a part of Philadelphia" that both stories were enormous because Vick and Halladay are "major entities on the sports landscape." Vick edged out Halladay out because the announcement was such a surprise and because Vick has a history of being big news - and not just in Philly.

12:27 am ET August 15, 2022 RETWEET
Actress Anne Heche has been taken off life support, several days after crashing her car into a Los Angeles home. cnn.it/3AmuxQX
cnnbrk

11:16 pm ET August 14, 2022 RETWEET
Anne Heche will be taken off life support today after she was matched for organ donation, a family representative sâ€twitter.com/i/web/status/1â€¦KQ
cnnbrk

11:14 am ET August 14, 2022 RETWEET
A man crashed into a vehicle barricade near the US Capitol Building and fired several shots into the air before takâ€twitter.com/i/web/status/1â€¦tx
cnnbrk