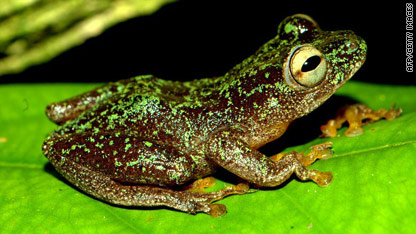 The three were found as part of an effort by Conservation International and the Amphibious Specialty Group of the International Union for Conservation of Nature to determine if 100 ŌĆ£lostŌĆØ amphibian species are really extinct.

"These are fantastic finds and could have important implications for people as well as for amphibians,ŌĆØ said Robin Moore, who organized the Search for the Lost Frogs, the official name of the campaign. The creatures could help in medical research or just in protecting water resources, Moore said.

Several specimens of the salamander, of which only a lone individual was identified in 1941, were found in a system of caves accessible only by a pothole in MexicoŌĆÖs Hidalgo province, Conservation International said.

The Mount Nimba reed frog, found by a local scientist in a swampy field near Ivory CoastŌĆÖs border with Liberia, hadnŌĆÖt been seen since 1967.

The Omaniundu reed frog hadnŌĆÖt been observed since 1979. It was spotted in a flooded forest next to a Congo River tributary.

The first phase of the lost frogs project continues until next month when the Convention on Biological Diversity opens in Japan. Scientists hope theyŌĆÖll have more successes to announce then, but Moore said itŌĆÖs a tall task.

ŌĆ£These rediscovered animals are the lucky ones ŌĆō many other species we have been looking for have probably gone for good," he said.

The US Forest Service is hitting a pause on prescribed fire operations in all the system's lands across the countryŌĆtwitter.com/i/web/status/1ŌĆ”TL
CNNweather

11:26 am ET May 21, 2022 RETWEET
Over 35 million people are under a heat advisory this weekend across the Northeast as record temperatures stretch fŌĆtwitter.com/i/web/status/1ŌĆ”4T
CNNweather

8:42 am ET May 21, 2022 RETWEET
A powerful tornado killed one person Friday as it ripped roofs off buildings and flipped cars in a northern MichigaŌĆtwitter.com/i/web/status/1ŌĆ”BN
CNNweather

7:02 am ET May 21, 2022 RETWEET
Researchers from the Met Office and Osaka Metropolitan University say the climate crisis and urban warming have pusŌĆtwitter.com/i/web/status/1ŌĆ”wg
CNNweather

8:02 pm ET May 20, 2022 RETWEET
A tornado swept through the German city of Paderborn Friday, injuring at least 30 people, authorities said, and bleŌĆtwitter.com/i/web/status/1ŌĆ”Cj
CNNweather