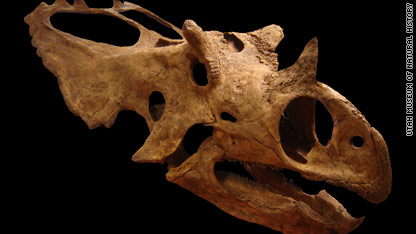 The discovery of the new plant-eating species, which are believed to have areas known today as the western United States during the Late Cretaceous Period, was announced Wednesday in the online open-access journal PLoS ONE, produced by the Public Library of Science.

The bigger of the two new dinosaurs, with a skull about 7 feet long, is Utahceratops gettyi, whose name combines the state of origin with ceratops, Greek for “horned face.” The second part of the name honors Mike Getty, paleontology collections manager at the Utah Museum of Natural History and the discoverer of this animal.

With 31 skull "ornamentations," including 15 horns, Kosmoceratops richardsoni takes its name from the Latin word for "ornate." Its horns - located over the nose, atop each eye, at the tip of each cheek bone, and ten across the rear margin of the bony frill—make it the most ornate-headed dinosaur known. The latter part of the name honors Scott Richardson, the volunteer who discovered two skulls of this animal.

The newly discovered dinosaurs were inhabitants of the “lost continent” of Laramidia, the western portion of North America that formed when a shallow sea flooded the central region, isolating the eastern and western portions of the continent for millions of years during the Late Cretaceous Period.

Utahceratops and Kosmoceratops are the two latest species to be unearthed in Utah's Grand Staircase-Escalante National Monument, which is proving to be a "treasure trove" for palenotologists in the new millenium, Mark Loewenof the Utah Museum of Natural History said.

"Every dinosaur we're finding is related to others we've already seen but a completely new species," said Loewen, a paleontologist who participated in the study. "We have to change our views on why they were living in the same time slice, but completely different from those living in Canada."

WPost: “The confirmation of the meeting provides new evidence of the success that the president’s allies had in gtwitter.com/i/web/status/1…XyWBri
susancandiotti

11:31 am ET May 17, 2022 RETWEET
“In recent weeks, both the U.S. and the Cuban governments have started some conversations, amid a surge of Cubans ttwitter.com/i/web/status/1…Z9HF
susancandiotti

WPost: “The confirmation of the meeting provides new evidence of the success that the president’s allies had in gtwitter.com/i/web/status/1…XyWBri
susancandiotti

11:31 am ET May 17, 2022 RETWEET
“In recent weeks, both the U.S. and the Cuban governments have started some conversations, amid a surge of Cubans ttwitter.com/i/web/status/1…Z9HF
susancandiotti