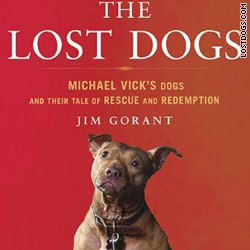 With Michael Vick starting for the Philadelphia Eagles this weekend, it appears the controversial quarterback’s NFL career has been rehabilitated. Another tale of rehabilitation appears in a book out this week about the 51 pit bulls recovered from Vick’s Bad Newz Kennels.

“The Lost Dogs: Michael Vick’s Dogs and Their Tale of Recovery and Redemption” is written by Sports Illustrated senior writer Jim Gorant. It chronicles the fate of the 49 remaining dogs. The professional athlete served nearly two years in prison on charges related to the dogfighting ring and mistreatment of the dogs.

Usually animals from illegal dogfighting operations are euthanized, according to Stephen Zawistowski, a psychologist and ASPCA animal behavior specialist who worked on the Vick case. In an interview this week with NPR, he said the $1 million Vick paid in restitution gave the ASPCA a unique opportunity to rehabilitate most of the dogs. In the end, only one was euthanized, while the rest were placed in dog sanctuaries or have been adopted.

Gorant argues that the Vick case may help rehabilitate the reputation of pit bulls as well. "As odd as it may seem, Michael Vick may be the best thing that ever happened to the pit bull,” he told NPR. “He gave the forum to discuss this and make it possible to get the message out there that these dogs are not what they've been made out to be in the headlines, that they really are just sort of dogs."

SI.com: What happened to Vick's dogs?

NPR: The road to recovery for Michael Vick's dogs

It’s not your imagination – the renowned Washington Post reporter and associate editor really does publish a book every couple of years containing some sort of bombshell about how a president has handled a crisis. What makes it intriguing is that Woodward does so with the cooperation of each administration he covers, whether the administration really wants him there or not.

Politico’s Mike Allen and John Harris wrote on Tuesday, “Early in President Barack Obama’s term, he and his aides faced a rite of passage familiar to every White House for the past 40 years: What to do about Woodward?”

Clearly the president gave Woodward his time — as did many administration officials. The first glimpse of details from “Obama’s War” made headlines Wednesday in The Washington Post.

When the book hits stores on September 27, readers will find out what an hour-long interview with the young commander in chief revealed about the current U.S. war strategies. The book will also feature standard Woodward elements: Eighteen months of reporting, classified memos, staff portraits, and the always-present inner-circle conflict.

Trying to get around Woodward is futile, Politico suggests. “At times during the reporting, according to administration officials and other sources familiar with the book, Woodward surprised top defense and intelligence officials by coming in for interviews armed with classified maps, in some cases labeled with code names for clandestine operations.”

Woodward has written 16 other books for publisher Simon & Schuster, starting with the legendary “All the President’s Men.”

CNN: Official defends Obama ahead of revelations in Woodward book