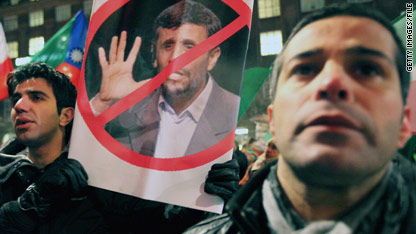 Iranian protesters take to the streets to dispute the election of Mahmoud Ahmadinejad in December 2009.

When he spoke at last year’s meeting, he launched into an attack against the United States, Israel and the West while, back in Iran, the pro-government Revolutionary Guard cracked down on pro-reform demonstrators. During elections, the Green Movement gained momentum, and for a time it seemed like supporters with the use of Twitter could topple Ahmadinejad.

But this year, Ahmadinejad may dial down the rhetoric a notch as Iran comes under increasing pressure from world powers to end their nuclear program. The United Nations Security Council imposed a new round of sanctions in June and the Council members – China, France, Russia, the United Kingdom and the United States – have renewed efforts to bring Iran back to the negotiating table.

In what may have been a preview to his General Assembly speech, Ahmadinejad blamed capitalism and transnational corporations for the world’s woes when he addressed the meeting on the Millennium Development Goals, the U.N.’s initiative to reduce poverty, hunger and disease around the world. But absent from the speech were attacks aimed at the U.S. and Israel.

Anti-Ahmadinejad protestors in New York were not surprised. While the Iranian president portrays an image of a self-confident leader firmly in control of his country, several prominent pro-reform Iranians in the United States claim that Ahmadinejad’s support in Iran is waning.

They tell CNN that there are a growing number of conservatives in Iran who feel that Ahmadinejad’s provocative, controversial statements have directly resulted in world opinion turning against the country. CNN Radio’s Steve Kastenbaum spoke with Iranian dissidents in the U.S. about the state of the Green Movement in Iran today.