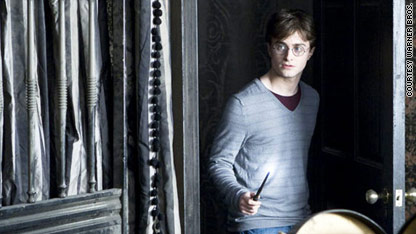 Fans are pumped over the upcoming release of "Harry Potter and the Deathly Hallows."

With 57 days left until the premiere of the latest installment in the Harry Potter movie franchise, fans have much to "squee" over. Since yesterday's release of the officialÂ trailer of "Harry Potter and the Deathly Hallows," fans have been furiously uploading reaction videos on YouTube and Tweeting over every twist and turn in the 2:25 spot. And then there's the buzz on the message boards... While the general tone of the reaction ranges from intense reverence to gleeful delirium, for some, it's never too early to start bemoaning the end of the epic franchise.

In fact, the folks at Hogwarts Radio would have you believe that the trailer'sÂ "awesomeness" is to blame for Facebook's mid-afternoon crash on Thursday, the second the social networking site has experienced in the past 48 hours. Facebook attributes the outage to "latency issues with the API" and says it is working on a solution, but that hasn't stopped the peanut gallery from Tweeting about it. Will this overshadow news that Facebook founder Mark Zuckerberg plans to give $100 million to schools in Newark, New Jersey, some ask, an act viewed as an effort to neutralize buzz over the upcoming film, "The Social Network," a brutal (and, admittedly, fictionalized) biopic chronicling the early days of Facebook.

Even these intermittent blips have not been able to push off the radar all the buzz surrounding sexual abuse allegations against Atlanta megachurch pastor Eddie Long. The beleaguered pastor has said he will respond to the allegations on Sunday, but meanwhile, pictures of his bodybuilder's physique, released by lawyers for his accusers, are flying around the internet, while pundits muse over how the scandal will affect the culture of the African-American evangelical church.