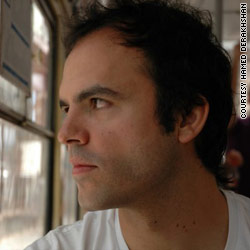 The Iranian blogger accused of working with "hostile" governments, propaganda against the Islamic establishment, propaganda in favor of anti-revolutionary groups, and insulting religious sanctities says he has been convicted, his mother says in London's newspaper the Daily Telegraph.

The prosecutor in Iran is seeking the death penalty.

Derakhshan, known as the "blogfather," is credited with creating a blog platform for Persian characters. While living in Canada and Britain, he became known as a defender of President Mahmoud Ahmadinejad. He also has traveled to Israel on a one-man peace mission.

The Telegraph reported that he was arrested within weeks of his voluntary return to Iran in 2008.

A U.S. district judge is expected to announce Friday whether the Air Force major can be reinstated after being honorably discharged for having a homosexual relationship.

Witt was a decorated operating room and flight nurse with 20 years in the military. In 2003, President Bush awarded her the Air Medal for her Middle East deployment. She also earned the Air Force Commendation Medal for saving the life of a Defense Department worker.

She was honorably discharged in July 2007 on the grounds that she had a six-year relationship with another woman, a civilian.

She filed a lawsuit seeking to reverse the Air Force's decision to discharge her.

The Seattle Times: Why gay stigma in ranks?

9:47 pm ET May 6, 2021 RETWEET
A smoldering Sequoia tree that is still burning from the 2020 Castle Fire in California has been discovered by scieŌĆtwitter.com/i/web/status/1ŌĆ”5J
cnni