Georgia pastor Eddie Long will take to the pulpit Sunday to tell his side of the story five days the first of four lawsuits was filed accusing him of coercing young males into sexual relationships.

Long, who has led the growth of the Atlanta-area New Birth Missionary Baptist Church to 25,000 members, is expected to speak on the matter during the 8 a.m. worship service and again at a 10 a.m. news conference.

Video: Long will not allow cameras at service

Mideast talks on the clock with settlement controversy

The clock is ticking as the United States seeks a way to keep Middle East peace talks from falling apart over this weekend's end to an Israeli moratorium on settlement construction.

The issue of settlement construction is highly controversial, and the Palestinians have said a restart by the Israelis would be reason enough to end talks.

The Department of Defense recently purchased and destroyed thousands of copies of an Army Reserve officer's memoir in an effort to safeguard state secrets, a spokeswoman said Saturday.

"DoD decided to purchase copies of the first printing because they contained information which could cause damage to national security," Pentagon spokeswoman Lt. Col. April Cunningham said. 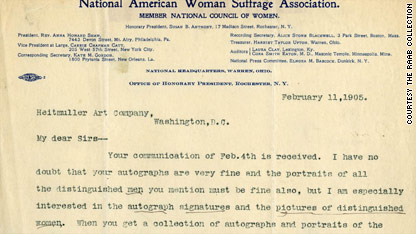 Susan B. Anthony letter wrote this letter in 1905, a year before her death.

A newly discovered letter written by civil rights leader Susan B. Anthony decrying the treatment of women as "pets" has gone on sale for $15,000.

The letter offers a rare, personal glimpse into the powerful emotions behind the fight for women's equal rights, said Nathan Raab, Vice President of The Raab Collection, which is offering the letter for sale.

"This letter has the unique perspective of being simultaneously a reflection of the pain of her female contemporaries at being shut out of society's privileges, and also the optimism with which they worked for equal rights," Raab said.

END_OF_DOCUMENT_TOKEN_TO_BE_REPLACED

Knives, guns and bottles were drawn in a fight after a party early Saturday near downtown Los Angeles, California, resulting in one death and 10 injuries, police said.

No one is in custody and the incident was not believed to be gang-related Los Angeles Police Department spokesman Cleon Joseph said.

Partygoers were leaving a birthday celebration around 2:05 a.m. at a house in the Boyle Heights neighborhood when the dispute occurred, Joseph said.

Eight people were shot, one fatally, and three were stabbed. A 22-year-old Hispanic man died of gunshot wounds, police said.

Police earlier Saturday said that 12 people had been shot.

Britain's Labour Party on Saturday announced Ed Miliband as its new leader Saturday, four months after Prime Minister Gordon Brown resigned from the post when his party lost the election.

Several rounds of voting were required to determine Saturday's winner, since no one received more than 50 percent support in the early ballots.

Ed Miliband and his brother, David, who was also in the running, were locked in a battle for the top spot for until the very end. The final numbers gave Ed 50.6 percent of the votes and David 49.35 percent.

"Today a new generation has stepped forward to change our party," Ed Miliband said upon the announcement. "We are united in our mission to transform Labour so that, once again, we stand up for the hardworking majority who play by the rules and want a less divided and more prosperous Britain. I know we have a lot of work to do. The journey starts today."

END_OF_DOCUMENT_TOKEN_TO_BE_REPLACED

Mexican politican is critical after being shot multiple times

Ricardo Solis Manriquez was in critical condition at a local hospital after one of the bullets hit him in the head, said Carlos Gonzalez Estrada, a spokesman for the attorney general's office in Chihuahua.

Solis, the mayor-elect of the town of Gran Morelos, was scheduled to take office October 9.

END_OF_DOCUMENT_TOKEN_TO_BE_REPLACED 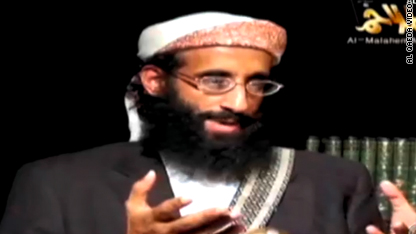 Anwar al-Awlaki has been linked to al Qaeda in Yemen by U.S. officials.

The Obama administration has invoked the state secret privilege in seeking to dismiss a lawsuit filed on behalf of the father of Yemeni-American cleric and militant Anwar al-Awlaki, which sought to prevent the U.S. government from trying to target him for assassination.

The government contended in a court filing that was submitted early Saturday morning that the case "would require the disclosure of highly sensitive national security information concerning alleged military and intelligence actions overseas."

END_OF_DOCUMENT_TOKEN_TO_BE_REPLACED

China on Saturday demanded an apology and compensation from Japan over the detention of its fishing boat captain seized near disputed waters, Chinese state media reported.

Zhan Qixiong was detained earlier this month after his trawler collided with Japanese vessels near disputed islands in the East China Sea.