In tradition of Twain, authors lash out at censors this week 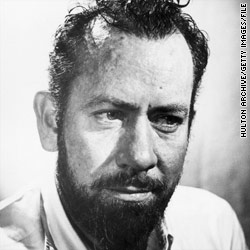 John Steinbeck's "Of Mice and Men" was one of the most commonly banned books between 1990-2009.

Librarians, wordsmiths and discerning readers the nation over are beating their bound volumes this week in protest of those who seek to censor literary works.

The commemorations range from banned book displays to wrapping books in caution tape to having people read outlawed books from a makeshift jail cell.

It should be no surprise devotees to the written word are incensed by efforts to ban books. History shows their longstanding commitment to keeping literature untrammeled.

Mark Twain is oft-credited with saying, "Censorship is telling a man he can't have a steak just because a baby can't chew it." German poet Heinrich Heine more seriously addressed the matter in an 1821 play, warning, "Where they burn books, they will ultimately burn people."

The prediction came 112 years before Nazis burned thousands of books in a public square. The quote from Heine, whose books were among those burned in 1933, is engraved in the ground at the Bebelplatz to remind people of the tragic day.

Across the United States this week, several groups are making similar - though less prodigious - statements about attempts to ban or censor books.

According to the American Library Association, there were at least 460 challenges to books in schools and libraries last year. The association estimates that the number could represent as few as a fifth of the total challenges because many are never reported.

"Not every book is right for each reader, but we should have the right to think for ourselves and allow others to do the same," ALA President Roberta Stevens said in a news release titled, "Book banning alive and well in the U.S."

Here is the ALA's list of top banned/challenged books over the last decade:

Some of these works have long been the target of censors. Schwartz's, Angelou's, Cormier's and Steinbeck's offerings were actually on the top 10 list for the previous decade, according to the ALA.

The ALA's Office of Intellectual Freedom defines a challenge as any "formal, written complaint filed with a library or school requesting that materials be removed because of content or appropriateness." The complaints most often come from parents, and not all challenges result in bans.

Sexually explicit material and offensive language are commonly cited as top complaints, but the ALA says books have also been challenged because they're violent, "anti-family," unsuited to an age group, or because they contain violence, homosexuality or religious viewpoints.

However, The Baltimore Sun points out that the reasons can be a little more frivolous: "A Light in the Attic" was banned because it encouraged children to break plates so they wouldn't have to dry them; "Little Red Riding Hood" caused problems because the wine in the picnic basket condoned alcohol use; and "The Rabbit's Wedding" became controversial because one bunny was black, the other white, thereby encouraging miscegenation.

Various bookstores, schools and libraries this week will erect banned book displays and host authors whose works have drawn the ire of censors. Colleges like the University of Arizona and DePauw University will have such displays, and Arizona will focus on "To Kill a Mockingbird" (No. 21 among banned books over the last decade) and offer students a free screening of the movie Tuesday. The book is celebrating its 50th anniversary this year.

At the Kalamazoo Public Library in Michigan and at Indigo Bridge Books in Lincoln, Nebraska, local artists are creating pieces commemorating books that have been yanked from shelves.

Several libraries and bookstores are holding readings of banned books, and the Yuma County Library District in Arizona has rounded up volunteers to sit in its makeshift jail cell and read for a term of 30 minutes. Last year, the sheriff was among the participants, the Yuma Sun reported.

In Chicago, Illinois, where the ALA is headquartered, banned authors Myracle and Carolyn Mackler are scheduled to share their experiences Saturday in Bughouse Square. Chbosky, Richardson and Parnell could possibly show up as well. The City Lit Theater Company will perform work from authors who can't make the event.

The American Booksellers Foundation for Free Expression has myriad ways - grand and quaint - to celebrate the week if there isn't an event near you.