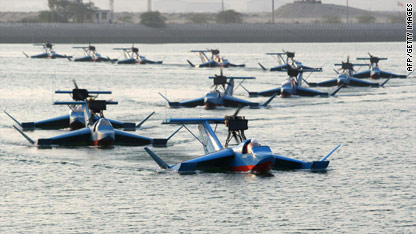 Iran's Defense Ministry released photos of what it says are its new radar-evading flying boats, the Bavar 2.

The craft, dubbed the Bavar 2, is armed with a machine gun and carries surveillance cameras, according to a report from the Iranian Student News Agency. 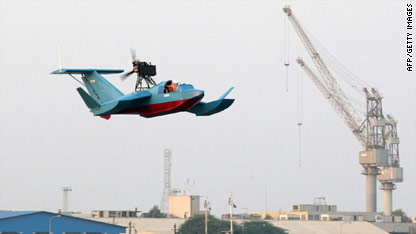 "Islamic Republic of Iran is one of the few countries which managed to design, build and use flying boats in a short time," said Defense Minister Brig. Gen. Ahmad Vahidi, who oversaw the delivering of the aircraft at the Bandar Abbas naval facility on the Persian Gulf near the Strait of Hormuz.

The delivery comes as Iran celebrates its Week of Sacred Defense, which commemorates its eight-year-long resistance to the 1980 Iraqi invasion, according to the Fars News Agency.

The flying boats look like one Iran used during Persian Gulf war games in April 2006. Media reports from the time include a video of a flying boat taking off.

After those 2006 reports, bloggers poked fun at Iranâ€™s so-called stealth technology, saying the flying boat looked like something anyone could buy in kit form from mechanical magazine ads.

Over six decades on the throne, Queen Elizabeth II has crafted a brightly colored signature look, and her sartorialâ€twitter.com/i/web/status/1â€¦1Y
cnni

9:01 pm ET June 12, 2021 RETWEET
Firefighters used multiple tools and freed this baby raccoon after it got its head stuck in a sewer cover, officialâ€twitter.com/i/web/status/1â€¦Je
cnni

8:01 pm ET June 12, 2021 RETWEET
"I feel that I'm a partner on this journey of healing, bringing together, unity," Jill Biden said during a brief Q&â€twitter.com/i/web/status/1â€¦py
cnni

7:30 pm ET June 12, 2021 RETWEET
This high school principal dazzled his community when he sang "I Will Always Love You" at graduation. He explains tâ€twitter.com/i/web/status/1â€¦x0
cnni