Kevin Spacey will have to pay almost $31 million to Media Rights Capital, the production company behind "House of C‚Ätwitter.com/i/web/status/1‚Ä¶HQ 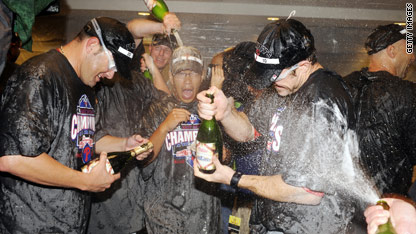 While four other teams failed to clinch either a division title or a playoff spot Monday night, Philadelphia delivered, writes SI.com's Joe Lemire. The Phillies won¬Ýtheir fourth consecutive East crown as they beat the Nationals 8-0 behind the strength of ace Roy Halladay's 21st win of the season.

But while the NL East is wrapped up, three divisions and both wild cards remain undecided as the final week of the MLB season ticks away. Baseball's hunt for October leads Tuesday's sports schedule, while soccer and tennis are also on the docket.

Here are a look at the day's key baseball races, all times Eastern.

Yankees at Blue Jays (7:07 p.m., MY9, SNET) The Yankees and Rays are both one win away from clinching postseason berths, while the Red Sox need a win and a Bronx Bombers' loss to keep their own hopes alive.

Here's the gist: the Braves lead the Padres by a half-game in the NL wild-card race, while the Giants lead San Diego by a full game for the NL West lead. The Giants and Padres will hook up this weekend for a key series and while nothing will be decided Tuesday, San Diego is in danger of putting itself even further behind.

26 - Hall of Fame quarterback and kicker George Blanda spent 10 seasons with the Bears, seven with the Oilers and nine with the Raiders. He died Monday at 83.

12 - The Washington Wizards opened training camp at the stroke of midnight on Tuesday, drawing 4,000 fans at the Patriot Center on the George Mason University campus. They are the first NBA team to open camp with a college-style Midnight Madness.