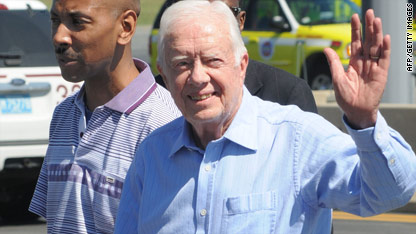 [Updated at 2:03 p.m.] Josesph-Beth Booksellers has told about 400 attendees that President Jimmy Carter will not be attending the scheduled Tuesday book signing.

The event has not yet been rescheduled, but a Carter Center statement said earlier that the president would resume his book tour next week.

[Updated at 1:48 p.m.] An employee at Joseph-Beth Booksellers in Lyndhurst, Ohio, says about 400 people are still waiting at the bookstore to see President Jimmy Carter.

Some have been there since 9 a.m. ET, the employee said.

Carter was initially scheduled to be at the bookstore at 1 p.m., but his staff moved it up to noon prior to the president's hospitalization.

The employee, who declined to identify himself, said there were still Secret Service agents at the store, and there has been no official announcement that Carter is not showing.

[Updated at 1:21  p.m.] Jimmy Carter is "resting comfortably" after being rushed from the airport to a hospital upon his arrival in Cleveland on Thursday morning, according to the ex-president's nonprofit organization.

"While on a flight to Cleveland, former U.S. President Jimmy Carter developed an upset stomach, and, upon arrival, was taken to Metro Health Hospital for observation," said a statement from Carter Center spokeswoman Deanna Congileo. "He is resting comfortably and is expected to resume his book tour this week."

[Updated at 1:10 p.m.] President Jimmy Carter has been transferred to Metro Health Hospital in Cleveland, Ohio, after experiencing an unknown health issue on a flight to the city, an airport spokesperson said.

Jackie Mayo, the public information officer for Cleveland Hopkins International Airport, said the 39th president was transferred to the hospital at approximately 11:30 a.m. ET after paramedics met Carter's plane upon its arrival.

Carter, who will turn 86 on Friday, was reportedly in Ohio to autograph copies of his new book, "White House Diary," at Joseph-Beth Booksellers in the suburb of Lyndhurst, according to the bookstore.

Since leaving the Oval Office in 1981, Carter has devoted his time to the Carter Center in Atlanta, which monitors elections, fights disease in developing nations and seeks to strike peace deals internationally.

In addition to some controversial comments made in his book, which was released this month, Carter made headlines recently when he negotiated the release of U.S. citizen Aijalon Mahli Gomes, who had been jailed in North Korea.