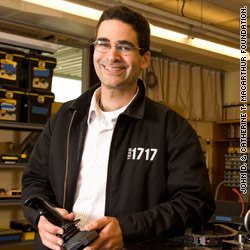 Physics teacher Amir Abo-Shaeer, 38, is one of 23 people who will receive a highly coveted $500,000 MacArthur Fellowship today. Abo-Shaeer created the Dos Pueblos Engineering Academy in 2002 to offer public high school students near Santa Barbara, California, a four-year applied-science curriculum focusing on math, physics and engineering. The program has a laboratory and requires students to compete in a national robotics competition. The latest track is for students to launch entrepreneurial pursuits, Abo-Shaeer said.

Abo-Shaeer pursued the project after working with youths as a graduate student while attending nearby U.C. Santa Barbara. He began by recruiting students - girls in particular - at the junior high school level. MacArthur officials call the program a "school within a school." Abo-Shaeer sees it as a personal success. "This has also been exciting for me because to the contrary of what you always hear on the news - 'students don't want to do science, students don't want to do math' - we have had a line of people hanging out the door to get into the program."

CNN has reported that Pete Rouse, the senior adviser to the president, might be tapped as interim White House chief of staff if Rahm Emanuel leaves the post to run for mayor of Chicago. Rouse is referred to as the "101st senator" by the White House because of his 30-plus years as a chief of staff to members of Congress, including 19 years with Sen. Tom Daschle, followed by four more with Sen. Barack Obama. Rouse also served current Senate Majority Whip Dick Durbin when he was a congressman.

How would Rouse differ from Emanuel as chief of staff? Emanuelâ€™s aggressive tactics are legendary. Rouse, in his early 60s, is considered a consummate Democratic insider, who plays under the radar with subtle but highly effective finesse. Still, various reports indicate Rouse would not be chief of staff for very long. Marc Ambinder of The Atlantic suggests he may very well help choose his former boss, Daschle, as Obama's new chief of staff.

While kidnapping victim Jaycee Dugard made news Monday, announcing that her memoirs will be published next year, Irish writer Emma Donoghue seems to have already encapsulated the Dugard experience. Her shocking new work of fiction, released this week, is called "Room." The Booker prize-nominated work is the story of a 5-year-old named Jack and his mother, who are forced to live in an 11-by-11-foot space. The story is told entirely in the voice of the child. Their only outside encounter: Old Nick, who brings the family food and visits while Jack is supposedly sleeping.

"Room" unravels as this innocent boy slowly learns the truth about his captivity, the existence of a world outside, his mother's kidnapping at age 19 and who is his father is. So was Dugard the inspiration for the book? Tragically, no, Donoghue tells NPR. "Room" was in process when the Dugard case broke. The story is actually inspired by the case of Josef Fritzl, an Austrian man who imprisoned his own daughter for 24 years, forcing her, and the children he sired with her, to live in a basement the entire time.

Evan Osnos, who covers China for The New Yorker, has written a recent piece that extensively details the delicate balance between the Dalai Lama, his allies in the U.S. and those in Beijing who view him as "the face of resistance." Osnos' account explains why politics in China have prevented the 75-year-old religious leader from naming his own successor. He also travels to the Tibet that His Holiness fled on foot in the 1950s and compares it with the Tibet of today, now filled with Han Chinese. The 14th Dalai Lama returns to the U.S. on October 12, where he'll visit Palo Alto, Atlanta and Cincinnati.

Thousands of miles from its native habitat, a Bengal tiger has been spotted in the front yard of a Houston home. Bâ€twitter.com/i/web/status/1â€¦Kr
cnni

6:25 pm ET May 12, 2021 RETWEET
"Some markets served by Colonial Pipeline may experience, or continue to experience, intermittent service interruptâ€twitter.com/i/web/status/1â€¦Z3
cnni

5:56 pm ET May 12, 2021 RETWEET
JUST IN: Colonial Pipeline has initiated a restart of its pipeline operations after a ransomware attack forced oneâ€twitter.com/i/web/status/1â€¦wu
cnni