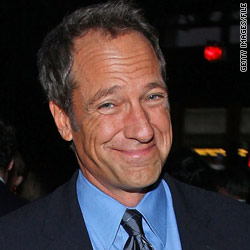 Two years ago, the Discovery Channel's "Dirty Jobs" host launched a private effort to end what he called America's "war on work." He set up a website called MikeRoweWorks, and video-blogged about the way vocational schools were seeing their number of applicants decline, and how trade labor was being marginalized. Additionally, he talked about how there weren't enough welders, pavers, pipefitters and other skilled workers to keep America's bridges and roads from "literally falling apart."

Rowe's mission could reach critical mass Wednesday when he arrives on Capitol Hill with members of the Association of Equipment Manufacturers. They'll lobby Congress to pass a bill requiring that the federal stimulus funds directed toward transportation actually be spent.

Originally, a spokesman for the Association of Equipment Manufacturers told CNN that only three percent of the stimulus funds allocated to transportation infrastructure had actually been spent. That figure is incorrect. Of the $26 billion provided in stimulus spending to repair roads and bridges, not three percent, but 50 percent, has been spent, according to government figures.

It is because of this stimulus funding that the transportation construction industry is not in complete shambles, says Jeff Solsby of the American Road and Transportation Association. â€śThe bottom line is the stimulus has been a lifeline for our industry, as without it many of our jobs would be goneâ€ť Solsby says.

Back to Rowe and AEMâ€™s original point, however: Has the annual investment in infrastructure been enough? There are three factors are offsetting any positive from additional stimulus spending, Solsby says.

First, it has been a year since Congress renewed legislation that supports the how much the is invested in annual transportation infrastructure. That bill is usually renewed every six years, and it covers items such as expansion and maintenance. In 2010, the amount invested is $41.1 billion.

Why has the renewal been delayed? A renewal could likely mean an increase in gas taxes to fund the investments. This is a very touchy subject given the election year, Solsby says.

Second, the amount of investment level determinedâ€”that $41.1 billionâ€”is not nearly enough even maintain the countryâ€™s transportation infrastructure, let alone expand it. According to the U.S. Department of Transportationâ€™s 2009 report on the conditions and performance of the nationâ€™s highways and bridges, at least $71 billion is needed in investment. (Incidentally, the government estimates that for every $1 billion spent on the traditional funding of transportation infrastructure, 34,000 jobs are created.)

Another unknown factor complicating the issue: massive cuts in state funding. â€śAlmost half of the states decreased their own infrastructure funding,â€ť Solsby says, â€śand that offsets any [benefits of the] stimulus.â€ť

When Craigslist agreed to take down its adult-services section earlier this month, pressure from various attorneys general and media coverage of sex trafficking online weren't the only contributing factors. Three years ago, Malika Saada Saar, the founder of The Rebecca Project for Human Rights, started researching the sexual victimization of girls. In May, the group bought an ad in the San Francisco Chronicle begging Craigslist co-founder Craig Newmark to stop the adult-services section, says a profile in the Daily Beast.

When that didn't work, Saar arranged a meeting with Attorney General Eric Holder and worked with the House Judiciary Committee to organize hearings on sex trafficking, according to the Daily Beast. Now the Craigslist adult-services section, as they say, is history.

The Daily Beast: The woman who beat Craigslist

Nearly three years after the troubled pop star was hospitalized and placed under the conservatorship of her father, it appears her comeback has been established. Tuesday night, Spears was at the center of the plot on Fox's musical comedy-drama "Glee."

Spears made a number of cameos in the program, according to the Wall Street Journal's "SpeakEasy" blog. Actress Heather Morris headlined the episode as Brittany S. Pierce. In dream sequences, "Brittany" rocked "Me Against the Music" with Spears herself in a cameo as the Madonna role.

Also in the lineup, Morris in the red leather bodysuit for "Oops, I Did It Again," in the sheer diamond bodysuit during a romp of "Toxic," and then wielding that huge python during "I'm a Slave 4 U." In a YouTube video posted by Fox, Morris called the opportunity "Spearstacular."