The Biden administration will seek a full five-year extension of a key arms control treaty between the US and Russiâ€twitter.com/i/web/status/1â€¦Ka

Americans' willingness to get a coronavirus vaccine is on the rise, with 66% saying they will try now that multipleâ€twitter.com/i/web/status/1â€¦rz

White House coronavirus coordinator Jeff Zients said he thinks the vaccine supply will be adequate to meet the Bideâ€twitter.com/i/web/status/1â€¦tE

A single ticket sold in Maryland matched all six numbers of the $731.1 million Powerball lottery, the fourth-largesâ€twitter.com/i/web/status/1â€¦bl 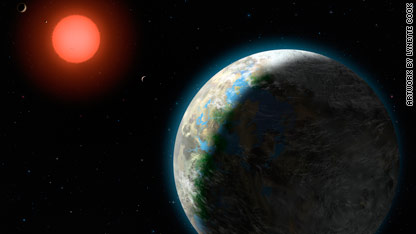 An artist rendering shows the four inner planets of the Gliese 581 system and their host star.

A team of astronomers from the University of California and the Carnegie Institute of Washington say they've found a planet like ours, 20 light years (120 trillion miles) from Earth, where the basic conditions for life are good.

"The chances for life on this planet are 100 percent," Steven Vogt, a UC professor of astronomy and astrophysics says. "I have almost no doubt about it."

The planet is three times the size of Earth, but the gravity is similar.

Dr. Elizabeth Cunningham, planetarium astronomer at the Royal Observatory in Greenwich, says the discovery is a huge deal.

"It could have liquid water on the surface," she said. "That's the first step to find life." 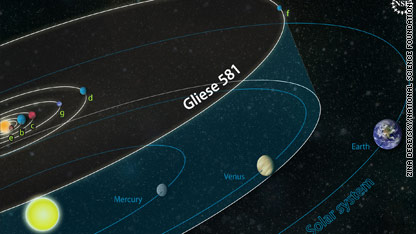 The Gliese 581 system's orbit compared to our own solar system. The planet labeled G is the one scientists believe could very likely support life.

There are hundreds of known extrasolar planets that have been discovered in the Milky Way, but this is the first that could support life.

Earthlings won't be traveling to Gliese 581g any time soon unfortunately. Scientists say a spaceship traveling close to the speed of light would take 20 years to make this journey.

But if we did - we'd find some other things familiar. The atmosphere and gravity are similar to Earth, and if you're from the polar regions, you'd definitely feel right at home. Scientists say the highest average temperature is about -12 degrees Celcius (10 Fahrenheit), but they point out that the planet doesn't have a night and day - one side continually faces the star and the other side faces the darkness of space. This means one side is blazing hot and the other freezing cold.

"It's not too hot, it's not too cold, it's just right" for water to form, Cunningham said.

The area is called the "Goldilocks zone."

Other planets near Gliese 581g have been discovered, but they are not habitable and are mainly comprised of gas. Gliese 581g, however, is a rocky planet.

It was discovered using the Keck telescope in Hawaii which has been observing the star Gliese 581 for 11 years.

"Keck's long-term observations of the wobble of nearby stars enabled the detection of this multi-planetary system," said Mario R. Perez, Keck program scientist at NASA headquarters in Washington.

Astronomers are excited this new planet was discovered so fast and relatively close by.

"I'm surprised we found one so fast," Cunningham said. "The implication is either we were very lucky or these planets could be relatively common."

Gliese 581g is in the constellation of Libra. While Earth takes 365 days to orbit our star, the sun, Gliese 581g orbits its star in 37 days.

China says that it is a "victim" of misinformation after Twitter restricted the account of the Chinese embassy in tâ€twitter.com/i/web/status/1â€¦2p
cnni

1:27 pm ET January 21, 2021 RETWEET
Perhaps the biggest impediment to President Biden is that much of the previous president's overseas dealings were sâ€twitter.com/i/web/status/1â€¦sX
cnni

1:10 pm ET January 21, 2021 RETWEET
The organizers of Glastonbury have announced that Britain's famous music festival will be canceled for a second conâ€twitter.com/i/web/status/1â€¦kU
cnni

12:16 pm ET January 21, 2021 RETWEET
City of London Police have discovered and destroyed a "significant" cannabis factory in the heart of London followiâ€twitter.com/i/web/status/1â€¦Kq
cnni