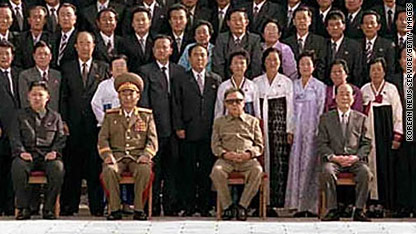 Kim Jong Un, bottom left, and his father, bottom right center, are seen with the rest of the Workers Party of Korea's central military commission.

Little is known about Kim Jong Un. Only two photos of him consistently circulate in news reports outside of North Korea because he's been kept off the radar by the North.

Kim Jong Un, who is widely expected to be the successor to North Korea's "Dear Leader," was also named to the Central Committee of the party. Earlier, during the WPK¬Ý conference, the younger Kim became a four-star general, according to the state-run Korean Central News Agency.

This photo was taken with the entire body and new leaders of the WPK at Kumsusan Memorial Palace, Pyongyang reported.

The Workers Party of Korea last convened its delegates more than four decades ago.