10:00 am ET - Medicine recall hearing -Â Johnson and Johnsonâ€™s CEO testifies before the House Oversight Committee on the companyâ€™s recent recall of infant and childrenâ€™s medicine.

END_OF_DOCUMENT_TOKEN_TO_BE_REPLACED 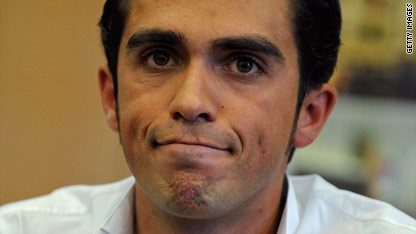 Alberto Contador in Pinto, Spain, on Thursday, the day he was suspended from cycling.

[Updated at 7:53 a.m.]Reigning Tour de France champion Alberto Contador has rejected the findings of a positive dope test taken while the cyclist was competing in this year's race.

Contador was provisionally suspended from competitive cycling by the sport's governing body, the Union Cycliste Internationale (UCI), on Thursday following the results of the test.

The Spanish rider, a three-time winner of cycling's showpiece event, had traces of the banned substance clenbuterol in a test sample he gave on July 21 - which was a rest day.

However, in a press conference held in the 27-year-old's home town of Pinto in Spain which CNN attended, Contador said he was innocent stating: "It is a food contamination case of which I am the victim."

He added that it was bad meat he had eaten the day before the test that had led to the false reading, before concluding that truth was on his side.

END_OF_DOCUMENT_TOKEN_TO_BE_REPLACED

The legendary entertainer Tony Curtis has died,Â  according to Entertainment Tonight.

A major insight into how Romans on the southeastern English coast would have lived has been revealed by the excavatâ€twitter.com/i/web/status/1â€¦62
cnni

10:31 am ET October 28, 2021 RETWEET
Tough new Covid-19 restrictions went into effect in Moscow on Thursday, with the Russian capital entering an 11-dayâ€twitter.com/i/web/status/1â€¦KX
cnni