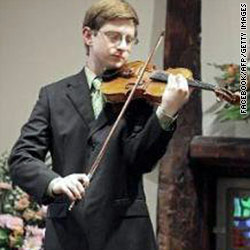 In the week since Tyler Clementi updated his Facebook page with the status, "jumping off the gw bridge sorry," web pages dedicated to the Rutgers University freshman have cast him as a victim of harassment and homophobia.

But to those who knew him in his hometown of Ridgewood, New Jersey, Clementi was a kind friend and talented violinist whose passion for music was his main focus.

Details about Clementi's sexual orientation are unclear. New Jersey prosecutors are considering bias charges against Clementi's roommate, Dharun Ravi, and friend Molly Wei, for their alleged roles in streaming a webcast that showed Clementi having a sexual encounter with another man. Clementi's body was found Wednesday in the Hudson River.

Rutgers University student Danielle Birnbohm, who lived next door to Clementi and Ravi in the dorm, told CNN affiliate WPIX that Clementi was gay.

"It was obvious," she said.

Two Facebook pages established in Clementi's name have more than 42,000 fans, most of them strangers offering condolences to his family and lamenting the prevalence of bullying against homosexuals.

Tributes to Clementi by those who knew him before his tragic death, however,┬Ācast him in a happier light.

"I loved hearing you play your violin every Sunday morning at church. It saddens me greatly to know that you will never play again and never get to experience so many things in your life. I pray for you and your family everyday when I cross the bridge. You were a sweet young man who touched many hearts. You will be missed," Nicole Voight wrote on the page, "Honoring The Life Of Tyler Clementi."

A graduate of Ridgewood High School's class of 2010, Clementi played in the school orchestra and received the National School Orchestra Award from his high school. He was a member of the Ridgewood Symphony Orchestra and the Bergen Youth Orchestras, and worked as a violinist last year for a local theater production of, "I Love You, You're Perfect, Now Change," the Ridgewood Patch reported.

"He was so professional, so talented, everyone liked him. It was just a shock to hear. It's such a loss, he was such an incredible talent and such a great person," Ryan Pifher, director of Porchlight Light Productions, told the online publication.

"In the 3 years Tyler was at Ben Franklin School, I saw him often in the office. He was ALWAYS respectful, polite, and a thoroughly pleasant kid. This is a tragedy beyond measure. My sincere condolences to his family and friends... all the people who loved him and will miss him so much," Pat Guerin Lang wrote on the Facebook page.

Authorities say Clementi jumped off the George Washington Bridge between New York and New Jersey on September 22, a few days after his roommate allegedly Tweeted about him.

"Roommate asked for the room till midnight. I went into molly's room and turned on my webcam. I saw him making out with a dude. Yay," Ravi is believed to have said on September 19 on his Twitter account, which has since been deactivated.

Middlesex County prosecutors said Ravi surreptitiously positioned his web camera in the dorm room to capture Clementi's sexual encounter and broadcast it on the internet. Ravi tried to use the webcam again two days later, on September 21.

"Anyone with iChat, I dare you to video chat me between the hours of 9:30 and 12. Yes it's happening again," Ravi is believed to have tweeted. The next day, Clementi was dead.

Friends of Clementi's said he never came out as gay or had a girlfriend in high school, ABC News reported.

His top priority was always his role in the school orchestra, friend Rob Righthand told ABC.

"He was one of those kids who never had a girlfriend and never had a boyfriend. You just thought he wasn't open for dating or anything like that," said Righthand.

Our John Antonio is the kind of person you want as a boss. This sacrifice you donŌĆÖt see often in business of any kitwitter.com/i/web/status/1ŌĆ”YvuK
sarasidnerCNN

Our John Antonio is the kind of person you want as a boss. This sacrifice you donŌĆÖt see often in business of any kitwitter.com/i/web/status/1ŌĆ”YvuK
sarasidnerCNN