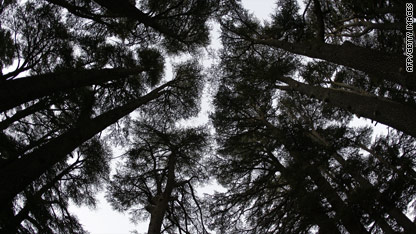 Genetically altered trees could help reduce global warming, according to a study released Friday in the journal BioScience.

The findings could one day lead to a forest of trees and other plants genetically engineered to pull in billions of tons of carbon from the air, counteracting the effects of global warming.

Scientists say the use of genetically engineered plants is just one of many initiatives that could help with carbon sequestration, the retrieval and longtime storage of carbon from the atmosphere.

Genetic alterations can improve the efficiency of plant processes, including increasing the carbon that vegetation naturally extracts from the air, according to the study's authors.

In addition, plants could be altered to absorb more sunlight, according to the study.

BioScience is published by the American Institute of Biological Sciences.

Tyler Hamilton has worked at the Amazon warehouse in Shakopee, Minnesota, for four years. He shares the good and thâ€twitter.com/i/web/status/1â€¦nF
cnni

5:39 am ET June 22, 2021 RETWEET
"Growing up, I remember so much how it felt to not see yourself represented." Meghan, Duchess of Sussex, is speakiâ€twitter.com/i/web/status/1â€¦IF
cnni

5:00 am ET June 22, 2021 RETWEET
A plague of mice in the Australian state of New South Wales has forced a prison to evacuate at least 420 inmates anâ€twitter.com/i/web/status/1â€¦AA
cnni