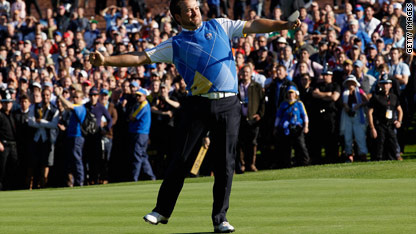 Graeme McDowell of Europe celebrates his birdie putt on the 16th green.

Despite a valiant late rally from the Americans, it was Europe that claimed this year's Ryder Cup in a face-off that came down to Monday's final match. Europe's win came when Graeme McDowell birdied 16, hanging in just enough to beat out Hunter Mahan 3 and 1 in an anchor match. "There was a reason why he was put [in the final spot]," Ian Poulter said of McDowell. "He's the U.S. Open champion. He pulled it off."

TheÂ victory marked Europe's fourth consecutive win on home soil and the first time that the Ryder Cup ended on a Monday, thanks largely in part to the torrential downpours that periodically halted the action.

But credit has to be given to the American contingent for its efforts. The team managed to even the score after its youngest team member, Rickie Fowler, won the final three holes to halve his match with Italian Edoardo Molinari. That led the U.S. and Europe to square-off in the 12th and final singles match of the tournament. SEE COMPLETE COVERAGEÂ on Golf.com.