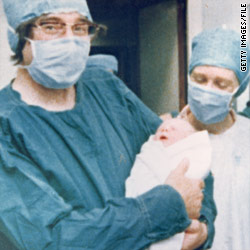 When Louise Brown got married in 2004, a scientist named Dr. Robert Edwards attended the wedding. He was also one of two men present when Brown was conceived in 1977.

Due to the work of Edwards and Dr. Patrick Steptoe, Brown was scientifically conceived in a laboratory - then implanted as an embryo in her mother's womb. She became the world’s first test-tube baby when she was born on July 25, 1978.

On Monday, Edwards, now 85, received the Nobel Prize for medicine for his work on in vitro fertilization, or IVF. Steptoe passed away in 1988. He would have shared part of the $1.5 million prize as well if he were still alive, reports say.

"It's fantastic news, me and mum are so glad that one of the pioneers of IVF has been given the recognition he deserves," Brown told the news agency Agence France-Presse. "We hold Bob in great affection and are delighted to send our personal congratulations to him and his family at this time."

Brown, 32, reportedly lives a low-key life with her husband near Bristol, England. The two have a son conceived naturally who was born in 2006, reports say.

Their father would have been 70 this week had he not been gunned down by Mark David Chapman outside his New York apartment building in December 1980. Yet half brothers Julian and Sean Lennon have long let go of the past.

In an interview with CBS News’ “Sunday Morning,” Julian Lennon said that despite previous conflicts with John Lennon's widow, Yoko Ono, he and Sean Lennon have been close for a number of years.

Julian Lennon, now 47, had pop hits of his own in the 1980s. And it was he - not John - who taught Sean how to play the guitar. “The truth is Julian was like my hero. He still is,” Sean told CBS. The two have remained close, with Julian even going on a two-week tour with Sean, who will soon be 35.

Today, the older Lennon has launched a career as a photographer. In September, he held his first gallery opening. His mother, Cynthia, John's first wife, as well as Sean and Yoko Ono attended. It is believed to be the first time all four had been photographed in public. Julian Lennon said any issues with Ono over his father’s estate are now over.

“If I hurt Sean's mother, then I hurt Sean,” he told CBS. “It's a roundabout way of thinking about things. But because I love Sean so much, I just don't want to hurt him."

She’s 27, a Minnesota native and a graduate of the Virginia Military Institute. Capt. Emily Naslund is also commander of the Marine Corps' first “female engagement team,” which was sent to Afghanistan on a seven-month deployment. The team’s mission? To interact with Pashtun women who are culturally forbidden to engage with men outside their community.

Naslund and some of the other 39 women of the patrol are featured in a recent article by The New York Times’ Elisabeth Bumiller. They patrol various areas, including Marja, Afghanistan. “You’ve got 19- and 20-year-olds walking around in the world’s most dangerous place, knowing what could happen to them, and they’re willing to do that anyway, and they’re willing to do that with passion,” Naslund told the Times. This mission, she added, “is going to be the highlight of my life.”

At the same time, the women have had to tread carefully as military law forbids them to be in combat. They’ve had to shoot back when attacked. One even was the first to treat a fellow Marine killed by a sniper. “The current policy on women in combat is outdated and does not apply to the type of war we are fighting …,” Naslund wrote in an e-mail to her parents, friends and the reporter in July.