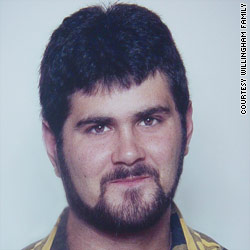 A Texas judge is set to consider whether a man who was executed for setting a fire that killed his children was wrongly convicted on what his supporters call "junk science."

State District Judge Charles Baird granted a request from Cameron Todd Willingham's family for a hearing to investigate whether he was wrongfully convicted using flawed science. The family's petition, filed September 24 in Travis County, also asks the court to examine whether the state┬Ā failed to adequately consider potentially exculpatory evidence before putting Willingham to death in 2004.

The lawsuit asks the court to repair Willingham's reputation by issuing a declaration that he was wrongfully convicted and to examine whether state officials committed official oppression in their handling of his appeals.

"Mr. Willingham's case, though tragic, is not unique. Rather, it exemplifies the systematic flaws in Texas' clemency process and habeas procedures that is proper for the Court of Inquiry to investigate," the petition states.

The closely watched case has been the subject of three independent reviews that have concluded the fire should not have been ruled arson. The most recent one, which was ordered by the Texas Forensic Science Commission, ruled in July that investigators used science available to them at the time, even though it was flawed.

Baird set the hearing for Wednesday and Thursday in 299th District Court in Austin, but a motion seeking the judge's recusal may postpone the proceeding.

Navarro County District Attorney Lowell Thompson, who prosecuted Willingham in 1992, filed the motion late Monday asking Baird to remove himself or to refer the motion to another judge to conduct a hearing on his fitness to hear the case, the Austin American-Statesman reported.

The motion cites several grounds. Among them are Baird's participation in the case as a member of the Texas Court of Criminal Appeals that voted to uphold WillinghamŌĆÖs capital murder conviction, the Statesman reported.

A district court judge may convene a court of inquiry - similar in form to an inquest in other states - if he has "probable cause to believe that an offense has been committed against the laws of the state," according to Texas statute.

Baird presided over the last instance of the rare judicial proceeding involving a┬Āman who died in prison while serving time for┬Ārape. The judge reversed Timothy Cole's conviction based on DNA evidence and a confession from another inmate.

Lawyers for Willingham's family claim that prosecutors relied on testimony from two Texas fire officials who said Willingham deliberately set fire to his home in Corsicana with his 3-year-old daughter, Amber, and 1-year-old twins, Karmon and Kameron, trapped inside.

While Willingham was on death row, a respected arson expert analyzed the case and discredited the bulk of the testimony, saying it was based on "completely unsupportable methodologies" and exacerbated by misleading testimony about the nature of arson investigations, according to court documents.

"But for this flawed testimony, Mr. Willingham would not have received a guilty verdict and a lethal injection," the petition states.

Moreover, the Willingham family claims, "despite overwhelming scientific evidence, state officials have continued to demonize Mr. Willingham and defend the arson evidence on which he and others have been convicted."

A spokeswomen for the governor's office said Gov. Rick Perry stands behind the conviction.

"Nothing the Austin court does can change the fact that Todd Willingham was convicted and sentenced to death by a jury of his peers for murdering his three young daughters.┬Ā His then-wife has told reporters that he admitted his guilt to her while he was serving on death row.┬Ā WillinghamŌĆÖs conviction was reviewed and upheld by multiple levels of state and federal courts (including nine federal courts ŌĆō four times by the U.S. Supreme Court alone) over the course of more than a decade," Lucy Nashed said in an e-mail.

Perry has come under┬Ā scrutiny for his handling of the case, with some accusing him of trying to quash the probe. Two days before the Texas Forensic Science Commission was to hear from an independent expert who had┬Āexamined the case, Perry replaced three board members, prompting the session's postponement.

12:17 am ET July 3, 2022 RETWEET
@patrickokeefe Well this is a big hello to Mama OŌĆÖKeefe!
sarasidnerCNN

12:17 am ET July 3, 2022 RETWEET
@patrickokeefe Well this is a big hello to Mama OŌĆÖKeefe!
sarasidnerCNN