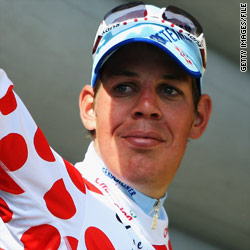 Bernhard Kohl, the Austrian cyclist stripped of his third-place finish in the 2008 Tour de France, told attendees at the United States Anti-Doping Agency's science conference Monday that under current conditions, no one can win the Tour de France without using performance-enhancing drugs.

"People know in cycling that it's not possible to win the Tour de France without it," Kohl told AOL's sports website FanHouse after the speech. "It's three weeks, 3,000 km and you climb [the equivalent of] Mount Everest four times. That's just not possible."

Kohl confessed to doping many times, yet passed all but one test, which resulted in a two-year-ban from the sport. He said he and other unnamed riders rely on doping to remain competitive. He would not comment on the investigation of current Tour champion Alberto Contador or other riders.

While Kohl is eligible to return, he says his career is over. "I can never come back," he said. "It's not possible if you say the truth."

From 1986 until 1990, Justice William Brennan, the iconic liberal of the U.S. Supreme Court, secretly granted a young Wall Street Journal reporter access to his thoughts and papers for the purpose of someday writing his memoirs. Two decades later, after overcoming admitted writer's block and with the help of Congressional Quarterly writer Seth Stern, Stephen Wermiel, 60, has finally published "Justice Brennan: Liberal Champion." The book was released Monday.

Brennan, who died in 1997, served on the Supreme Court for 34 years. The court was known for its policies curbing workplace discrimination, enforcing equal protection and enforcing privacy. This includes Roe v. Wade, the controversial 1973 decision permitting a woman the right to an abortion.

Revelations from the book: Brennan was both frustrated and mystified that Thurgood Marshall, the iconic civil rights attorney of the 1960s, appeared disinterested once he became a justice, Wermiel told The New York Times on Monday. Also, Brennan's personal views didn't always match the way he voted. "He has discomfort with women in his workplace," Mr. Stern said, "yet he's a champion of women's rights in his decisions. He's uncomfortable about abortion, but his privacy decisions make Roe possible. The press infuriates him at a personal level, and yet he's a champion of the press."