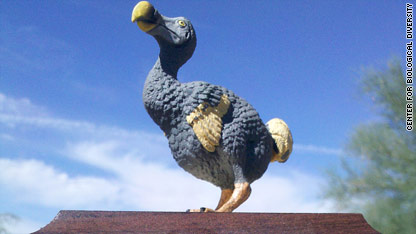 BP's former CEO has won a couple yachting trophies in his day. But displaying his latest trophy probably won't fly with him.

The Center for Biological Diversity, a non-profit organization, has given Hayward its 2010 Rubber Dodo Award. The award recognizes the person who the group says "has done the most to drive endangered species extinct."

According to the Center: "Under Hayward's leadership, BP secured the right to drill for oil in the Gulf of Mexico by submitting documents to the U.S. government falsely claiming that a major spill could not happen. It also submitted a false and ludicrous spill-response plan claiming it could capture spilling oil before the oil caused any environmental or economic damage."

During the months-long worst oil spill in U.S. history, more than 3,600 dead birds were collected in the Gulf, wildlife officials said. Hundreds of turtles and other animals were lost.

Hayward was called before a British parliament committee to discuss the spill and said cost cutting had not led to the disaster.

As the mouthpiece of BP, Hayward had a penchant for putting his foot in it. In May, he told the "Today" show that "there's no one who wants this over more than I do. I would like my life back."

He stepped down as BP's CEO in July and took a seat on the board with TNK-BP (A split venture between Russian investors and BP.)

The dodo is a flightless bird commonly used as the archetype of an extinct species.