For last shuttle mission, send your face up in space 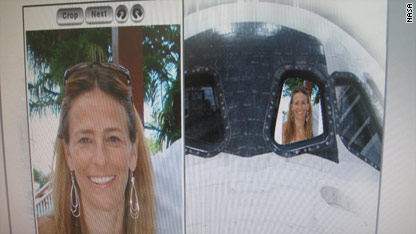 CNN Miami Bureau Supervising Producer Kimberly Segal tried out Faces in Space and her photo will be headed up with STS 133 and STS 134.

People from all over the world are signing up to fly on one of the last two scheduled space shuttle missions.

No training is necessary to be a virtual member of the STS- 133 or STS-134 crew.

"The general public has supported us through all of this, the good times and the bad times and we wanted a way to have them be a part of the last scheduled mission," says NASA's Debbie Byerly.

Byerly came up with the idea that is known as Faces in Space.  Anyone can go to the website, where you are instructed to upload a picture.

"We're digitally sending them up on the orbiter and they will be there with the crew, and then they'll bring it back down," Byerly explains.

Once the mission is completed you can return to the site and print a certificate. The certificate is signed by the Commander and says that the participant took part in the space shuttle mission.