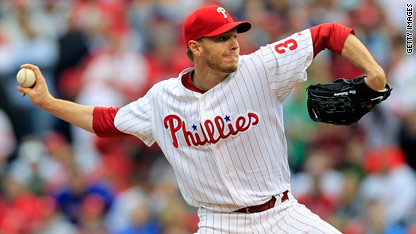 Halladay, making his first postseason start in his 12-year career, struck out eight and walked one. He threw 104 pitches, 79 for strikes.  Read the boxscore at SI.com

There were at least two hard hit balls against Halladay. Reds pitcher Travis Wood lined to right in the third. In the fourth inning, Reds star Joey Votto hit a hard grounder between second and third base that Phillies shortstop Jimmy Rollins fielded and threw to first for the out.

On May 29, Halladay threw a perfect game against the Florida Marlins, the 20th perfect game in MLB history. On the night he struck out 11 batters.

The only other no-hitter in playoffs history was a perfect game thrown by the Yankees Don Larsen, who won Game 5 of the 1956 World Series, defeating the Brooklyn Dodgers 2-0.

Brandon Phillips hit a slow roller about 10 feet in front of the plate that catcher Carlos Ruiz fielded and fired to first baseman Ryan Howard for the final out.

"I felt like we got in a groove early [with catcher Carlos Ruiz]," Halladay said.

"This is what you come here for. You come in you try to chip in and be a part of [the winning tradition]."

It's surreal. It really is. To be able to go out and have a game like that. It's a dream come true.

In Game 2 of the series, the Phillies will start Roy Oswalt against Cincinnati’s Bronson Arroyo on Friday at 6:07 p.m. ET