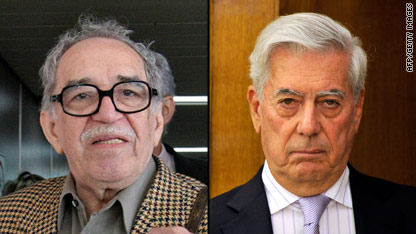 In 1976, writer Gabriel Garcia Marquez, left, caught a punch to the eye from Mario Vargas Llosa. Both men have Nobel prizes for their literary works.

Gina Sosa of Garcia Marquez's Iberoamerican New Journalism Foundation says the famed author does not have a Twitter account. She referred CNN to the foundation's Twitter account, where Director Jaime Abello explained the account in question belongs to either imitators or the author's followers.

The Twitter account greets visitors with a smiling photo of Garcia Marquez and proclaims in its bio, "I am Gabo, writer and journalist," using Garcia Marquez's sobriquet. The tweets, which began in 2007, are in first person as if they are from the author. They include book promotions, pontifications on the state of journalism and links to articles at Garcia Marquezâ€™s foundation.

CNN and several other media outlets, including BBC and The Associated Press,Â  reported news of the seemingly conciliatory tweet, so the hoaxster - whoever he or she is - duped a few of journalism's big dogs.

[Updated 12:17 p.m.] It is a tale of literary rivals, romantic intrigue, divergent politics, a black eye and a Nobel laureate taking to Twitter in what may be a fitting end to a 34-year saga.

According to legend, as well as The Sunday Times in London, Garcia Marquez saw his friend Vargas Llosa at a a Mexico City movie premiere in 1976. He went to embrace him when Vargas Llosa clocked him in the left eye, according to the newspaper.

â€śHow dare you come and greet me after what you did to Patricia in Barcelona!â€ť Vargas Llosa reportedly shouted, referring to his wife.

Though neither writer nor their wives have addressed the incident, the newspaper said there were rumors it involved Patricia seeking solace with Garcia Marquez and his wife after Vargas Llosa left her for a Swedish woman (Again, thatâ€™s the rumor, and we apologize if we've sullied Vargas Llosa's momentous day with semi-vetted drivel, but the esteemed writer has repeatedly refused to explain the feud, once saying he would leave it to the biographers).

After Vargas Llosa hit his fellow wordsmith, Mexican writer Elena Poniatowska ran for a steak to soothe Garcia Marquez's eye as he sat on the floor, his nose bleeding profusely, The Times reported in 2007.

Despite being godfather to Vargas Llosaâ€™s second son, Garcia Marquez stopped speaking to his friend and rival for decades. Their politics only confounded matters: Garcia Marquez, who leaned left, considered Cuban President Fidel Castro a friend, while Vargas Llosa embraced capitalism and was an outspoken critic of the Cuban revolutionary.

In January 2007, however, the pair reportedly made amends, and Vargas Llosa wrote a prologue to the 40th anniversary edition of Garcia Marquezâ€™s â€śOne Hundred Years of Solitude.â€ť

It was the same year Garcia Marquez turned 80, and photographer Rodrigo Moya, who had snapped pictures of his friendâ€™s shiner in 1976, released the photos in honor of Garcia Marquezâ€™s birthday and the bookâ€™s anniversary.