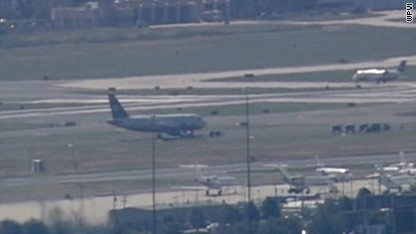 A plane was evacuated Thursday, and dogs are inspecting all luggage, police say.

Authorities evacuated a plane at the airport in Philadelphia, Pennsylvania, on Thursday after one of three people loading the plane failed to produce identification and then disappeared, police said.

U.S. Airways Flight 1070 was bound for Bermuda with 102 passengers and five crew members, police said. It has been towed to a secure part of the airport.

Federal and local police at the Philadelphia International Airport were searching for a person in uniform who was not wearing identification on the tarmac, a law enforcement official said.

"This could be a suspicious person or it could be nothing," the official said.

Authorities evacuated the plane after one of three people dressed in employee uniforms while loading the plane could not produce ID badges, Officer Tanya Little of the Philadelphia police said.

When airport officials sought the individual, the person was gone, Little said.

All bags aboard the plane are being checked by bomb-sniffing dogs after the aircraft was evacuated, a law enforcement official said.