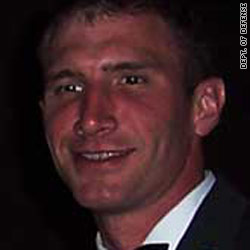 On the ninth anniversary of the start of the U.S. war in Afghanistan, the remains of the 29-year-old Army Ranger received a hero’s welcome Thursday at Hunter Army Airfield near Savannah, Georgia. Vogeler was killed on Friday during a firefight in Afghanistan’s Helmand province, officials told the Washington Post.

Vogeler was a career soldier who once turned down an opportunity to attend the U.S. Military Academy at West Point, choosing to stay with his men, the Post reported. When he was killed, he was serving his 12th tour of duty. The service in Afghanistan was his eighth tour there. He had also served four tours in Iraq.

In a statement, Col. Michael E. Kurilla, the commander of Vogeler's regiment, called him "the quintessential Ranger" and "a hero to our Nation, the Army and his family."

Vogeler was known for the respect he received from other soldiers, his Christian faith, and his devotion to family, his friends and colleagues said. His parents, Tim and Donna Vogeler, are deaf. Vogeler and his brother Chris, 27, served their parents as interpreters. Vogeler obtained a certificate to perform marriage ceremonies for fellow soldiers, after many of his men asked that he officiate at their weddings, his parents’ pastor told the Post.

He was a native of Frederick, Maryland, and the married father of two young children. His widow, Melissa, is pregnant.

"He died doing what he felt called to do," his parents’ pastor, the Rev. Peter C. Myers, told the Post. "Lance did not love war. But he had a job to do, and he took it extremely seriously."

It’s difficult to imagine that the suave co-host of “Project Runway” has ever been despondent. But Gunn told CNN’s Larry King on Monday that he was so depressed as a 17-year-old growing up in Washington that he tried to kill himself.

Gunn is the latest celebrity to speak out against bullying by posting emotional words of encouragement to gay, lesbian, bisexual, transgender and “questioning” youth on the YouTube channel “It Gets Better.” “I’m very happy today that that attempt was unsuccessful,” Gunn said on his video post. “At the time, it was all that I could contemplate.”

Gunn went on to study arts and literature at the prestigious Corcoran College of Art and Design, and spent 24 years on the faculty at Parsons School of Design before becoming creative director of Liz Claiborne Inc. in 2007.

Gunn urged his YouTube audience not to endure bullying alone. He said he himself needed “a very serious intervention” after his suicide attempt. He advocated for “The Trevor Project,” an anonymous support hotline. “I understand the desperation, I understand the despair, and I understand how isolated you can feel,” Gunn said. “People really care about you and I’m included in that group.”