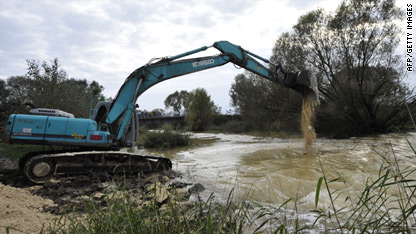 An excavator pours industrial gypsum to reduce the alkalinity into the Marcal River, Hungary.

Hungary toxic sludge - The river of red toxic sludge is inching ever closer to the Danube river. Four people have died and over a hundred have been injured after a leak from a metals plant reservoir sent caustic sludge through villages in Western Hungary. Read the full story

Greece strike - The Greek public sector union Adedy is scheduled to stage another 24-hour nationwide strike. It is the latest in a series of strikes and demonstrations against the government's austerity measures, pension and labor reforms.

Fashion bloggers - Fashion bloggers, including a 14-year-old named Tavi, and 17-year-old Charles Guislain, are doing an end run around the establishment icons like Vogue and Women's Wear Daily by covering the major fashion shows with borrowed photos and flip cams.  Jim Bittermann reports from Paris.

Chinese premier visits Italy - Chinese Premier Wen Jiabao will focus on economic ties during a visit to Italy on Thursday, on the third leg of his trip across Europe.