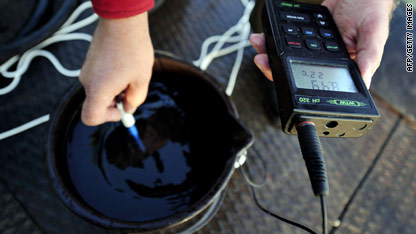 A Hungarian enviromental official tests a sample water from the Danube River.

Toxic sludge from an industrial accident that has left six dead may not harm the Danube River, according to water test results released Friday.

The latest readings taken by investigators indicate the pH level is 8.5 - lower than the original reading of 13, but still slightly above normal, said Gyorgyi Tottos, a spokeswoman for Hungary's emergency services department.

Tottos said Friday the 8.5 pH is not dangerous and can sustain life; pH readings range from 0 to 14. Levels lower than 7 characterize acids and levels higher than 7 denote bases. Highly acidic or highly basic water can harm living things.

Investigators found some dead fish in the water, but Tottos said the fish may have died upstream, before they reached the Danube.

The 8.5 pH level and fast-moving currents make officials optimistic that a natural disaster can be avoided, she said.