Days of waiting marked by brief moments of joy in Chile 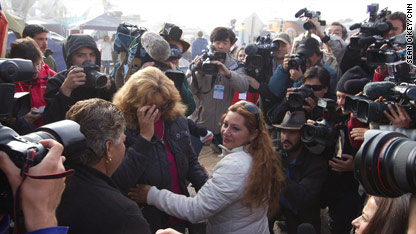 Family members react to the news that the drilling effort has reached the trapped miners as flocks of journalists try to capture that reaction in Copiapo, Chile, on Saturday.

As the 33 trapped Chilean miners prepare for a long-awaited ride to the surface, family members are enduring their own emotional roller coaster.

Days of waiting are punctuated by brief celebrations of milestones in the rescue effort at the San José mine site in northern Chile.

Joyful moments tend to be short-lived, anxiety returning with the realization that it will still be days before their loved ones might be returned to the surface.

The latest milestone came early Monday, when the process of encasing the first 96 meters of the rescue shaft was completed at 4 a.m. ET.

Celebration erupted early Saturday when news broke that the Plan B drill had pierced through to the miners, a major step forward in bringing the miners above ground. Horns blew, bells rang, and family members embraced, rushing to a nearby hill where Chilean flags were planted in honor of each of the trapped miners.

Officials have been diligent in keeping family members notified of the progress in the rescue efforts. Chilean Mining Minister Laurence Golborne has been making the rounds to each of the makeshift base camps set up by the families. During an impromptu visit with relatives of Kaky Lobos on Sunday night, he answered some questions - but mostly just tried to make an otherwise unbearable situation livable.

The thirst for information extends beyond the family to the myriad members of the national and worldwide press. Cameras and boom microphones quickly swarm the car of any official entering or exiting the gate leading to the mine, hoping for an update.

Some family members try avoid the media altogether. Even authorities are beginning to show irritation. After being encompassed by another group of eager reporters while walking through the camp Monday morning, Golborne expressed his frustrations.

"This isn't how we're doing this," he said. "We have protocol. I'm not going to say anything now."

As of Monday morning, officials say, things are on track for a Wednesday rescue attempt.