Liberation for Chilean miners possibly just a day away 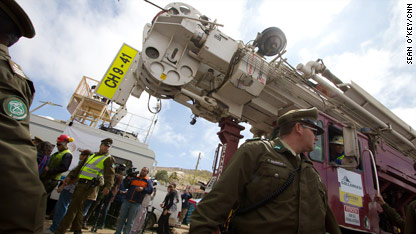 Final preparations are made Monday in the remote Chilean desert to rescue 33 miners.

The first of 33 Chilean miners who have inspired the world with their calm bravery and perseverance might be just be hours away from being plucked from the depths of the Earth.

"We are hoping to initiate the rescue beginning at zero hours on
Wednesday," or 11 p.m. ET Tuesday,Â  Laurence Golborne, Chile's mining minister, said. They've been trapped there since August 5. It wasn't learned until August 22 that the 33 were safely holed up in a small refuge deep in the mine.

The anticipated rescue will involve the delicate maneuvering of equipment with an emphasis on protecting the miners' health.

One rescuer and one paramedic will be lowered down into the mine first to prepare the men for transport to the surface.

At 5 p.m. ET, aboutÂ  six hours before the rescue starts, the miners will be switched to a diet of liquids, vitamins and minerals ahead of their trip to the surface.Â  Each trip is expected to take about 15 minutes.

MORE ON THE HEALTH PREPARATIONS

The change in diet is one way that officials are trying to mitigate some
of the challenges associated with the rescue. These include concern about the miners feeling lonely, dizzy or panicked while being lifted through the narrow shaft.

If all goes according to plan, the rescued miners will undergo about two hours ofÂ  health checks at a field hospital at the mine site. They will then be flown by helicopter to a hospital in the town of Copiapo.

CNN and CNN.com will carry live feeds from the rescue site when they begin.

PANORAMA OF MINE SITE

The UK's decision to wait up to 12 weeks before giving people their second dose of the Pfizer/BioNTech coronavirusâ€twitter.com/i/web/status/1â€¦Yi
cnni