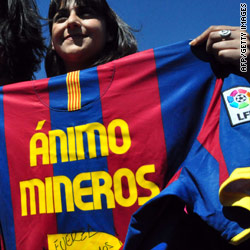 The 25-year-old is the daughter of Franklin Lobos, one of the 33 trapped miners in Copiapo, Chile. The elder Lobos is a former soccer star who, in 1980, led his home team - the Regional Atacama players - to championship victory and a promotion to the first division of Chilean soccer. Since the accident, Carolina Lobos has lived in a tent on the grounds of the mining site, smoking up to three packs of cigarettes a day.

Despite her concerns about her father, she said, this experience is allowing her to truly get to know him. Many of his former teammates are waiting in the campground with the Lobos family. And every night, Carolina sleeps with the Adidas t-shirt that was taken out of her father‚Äôs locker at the top of mine. She also wanted to send him a soccer ball, but it did not fit through the supply borehole.

According to an ESPN.com profile of Franklin Lobos, the incident made Carolina realize that she took family for granted. Once her dad is rescued, Carolina told ESPN, she is going ‚Äúto give him all the love I never gave him. Help him. Take care of him. Protect him.‚Äù

Despite his age, Lane Sutton is pretty well-connected for a 13-year-old. The eighth grader from Framingham, Massachusetts, is a budding social media guru who networks with high-profile CEOs like Tony Hsieh of Zappos.com and has celebrities like Tom Cruise among the 2,500 people who follow him on Facebook. In tune with the entrepreneurial spirit, Sutton runs KidCriticUSA.com, where he reviews restaurants, films, gadgets and books.

A self-described geek, he was barely 8 the day his first Mac laptop came in the mail. Sutton keeps himself informed by reading newspapers and subscribes to magazines like Fortune and Inc. He also got a ‚Äúyoung entrepreneur‚Äù mention on Forbes.com.

‚ÄúI‚Äôm working to help small businesses and companies create their online web presence and build their brand and following to create [return on investment],‚Äô‚Äô Sutton told The Boston Globe. ‚ÄúSocial media is growing, and I‚Äôm growing up with it.‚Äô‚Äô

It could have been a scene straight out of a Hollywood suspense thriller: A young man discovers that federal authorities are keeping track of him by planting a device on his car. But it actually happened to Yasir Afifi, a 20-year-old student in Santa Clara, California, who noticed a wire hanging out of his car after he took it for an oil change last week. According to The Mercury News, the service shop's owner did not know what the device was but took it off, and Afifi brought it home.

He showed it to a friend, who posted a picture on the news site Reddit in hopes of learning more about the device, ABC News said. A reader identified it as a tracking device sold only to authorities.

Two days later, FBI agents came to Afifi‚Äôs apartment, where they asked him if he had engaged in any ‚Äúabnormal activity‚Äù and then admitted planting the GPS tracker and asked for it back.

"I'm half-Arab, a young Muslim. ... I travel overseas for work and visit my brothers in Egypt," Afifi told the Mercury News. "It's their ticket to bother me forever."

12:57 pm ET December 6, 2022 RETWEET
Scientists behind a new study may have found the biological reason we get more respiratory illnesses in winter. It‚Ätwitter.com/i/web/status/1‚Ä¶hX
cnni

12:57 pm ET December 6, 2022 RETWEET
Scientists behind a new study may have found the biological reason we get more respiratory illnesses in winter. It‚Ätwitter.com/i/web/status/1‚Ä¶hX
cnni

11:20 am ET December 6, 2022 RETWEET
The House select committee investigating the January 6, 2021, attack on the US Capitol has decided to make criminal‚Ätwitter.com/i/web/status/1‚Ä¶8v
cnnbrk