Weather another potential obstacle for miners 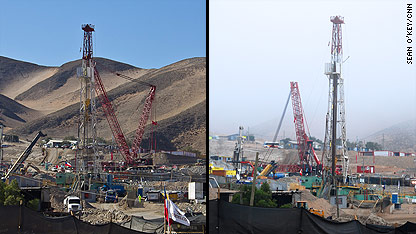 Hot, dry days (including foggy mornings) and bitterly cold nights await the miners when they reach the surface.

After two months of darkness, the first of the 33 miners that breach the surface of the rescue shaft in northern Chile will be in for another shock: searing heat or numbing cold.

Located in the heart of the Atacama desert, the San JosĂ© mine site experiences dry heat during the day under often cloudless skies, opposed by bitter cold at night - a typical daily dynamic in northern Chile's spring season.Mornings bring another degree of difficulty for rescue operations: thick, rolling fog, at times severely reducing visibility.

The switch between the two is anything but subtle. Once the sun sets behind the hills of the desert, temperatures plummet within minutes, sometimes spanning a 30 degree difference.

It's unclear at this point how long the rescue operation will take, but it's likely to span across both day and night, meaning some of the men will face extremely bright, hot conditions, while others will endure bitter cold.

While seemingly insignificant, it's yet another detail of an already complex and cautiously executed rescue operation.