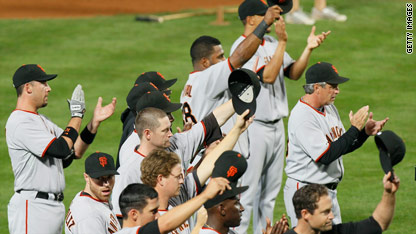 The Giants are on to the NLCS for the first time since 2002 as they beat the Braves 3-2, ending their division series in four games. They also ended the 29-year career of retiring Braves manager Bobby Cox, who has spent 25 years in Atlanta’s dugout. It’s a farewell that truly marks an end of an era, writes SI.com’s Joe Lemire.

The final piece of the postseason’s next round will fall into place tonight as the Rangers and Rays meet in Tampa. It’s just one of the can’t-miss events of a schedule that includes NHL, NBA preseason, tennis and soccer. Here are a few highlights, all times Eastern.

Rangers at Rays, 8:07 p.m. (TBS). The Rangers failed in their previous two chances to finish the Rays and reach the ALCS for the first time. Can they seal the deal with ace Cliff Lee on the mound, or will 19-game winner David Price lead Tampa to a date with the Yankees?

Avalanche at Red Wings, 7:30 p.m. (Versus, RIS, TSN2). The Red Wings are looking for their first 3-0 start since 2005, coach Mike Babcock’s debut season, as they host the rival Avalanche. Detroit has lost three of the last four at home vs. Colorado.

Heat vs. CSKA Moscow, 7:30 p.m. (NBTV). Chris Bosh has been on the losing side of an international exhibition before as the former Raptor lost to Maccabi Tel Aviv, the first they had beat an NBA team in 27 years. But it would a win of much greater magnitude if CSKA could beat a team boasting Bosh and LeBron James (teammate Dwyane Wade is likely out as he’s recovering from a right hamstring injury).

$50,000 – Amount the Trail Blazers’ Rudy Fernandez was fined by the NBA after his European agent made comments about wanting the guard out of Portland. It was the second time he had been fined for a representative’s remarks, following a $25,000 penalty for statements his U.S. agent made in August.

3 – North Carolina’s Marvin Austin, Greg Little and Robert Quinn all saw their careers end Monday. Austin was kicked off the team, while the NCAA declared the other two “permanently ineligible” as it continues an investigation into improper dealings with agents.