On the scene: Chileans gather to watch rescue, history 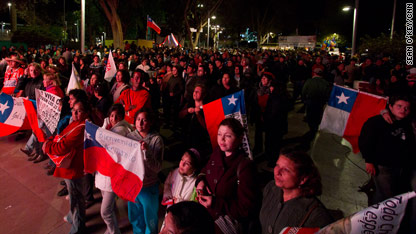 Chileans are gathering in droves to watch rescue coverage.

In between cheers of celebration in the city plaza of Copiapo, Chile, on Tuesday night, you can hear a pin drop.

Thousands of Chileans have gathered in Copiapo, one of the closest city centers to the San Jose mine site, to witness a live feed of the rescue efforts of the 33 trapped miners.

An enormous projection screen was erected in the plaza. It switches between Chilean cable television outlets, all focused entirely on the mine rescue. Vendors sell Chilean flags and banners reading celebratory sentiments such as  "Fuerza Mineros," or "strength to the miners."

Children run in front of the screen waving flags and signs, joining in the occasional chant.

Vendors are selling horns - reminiscent of the vuvuzela, and people are buying them up and going crazy whenever something happens.

Cheers erupt when news announcers read a list of the order of miners to be rescued. But at times, the only thing you can hear is the audio from the government video feed, showing workers making final connections to the rescue capsule.

Being here, it's hard not to occasionally stop and just watch along with the crowd - a crowd that seems to grow by the hour, gathering to watch a momentous event in the country's recent history. This story  has grabbed the world's attention and held on tight.