Robert Durst, who days ago was sentenced to life in prison for killing his best friend, has been placed on a ventilâ€twitter.com/i/web/status/1â€¦qr

MÃ¶tley CrÃ¼e singer Vince Neil was injured when he fell off the stage during a solo concert at a Tennessee music festwitter.com/i/web/status/1â€¦bsxp

Netflix says it fired an employee for sharing 'confidential' information outside of the company about David Chappelâ€twitter.com/i/web/status/1â€¦ZH

An assistant to the US House Sergeant-At-Arms has been arrested on child pornography charges, court records show cnn.it/3mZ1Fq4

Southern California's Alisal Fire, which closed parts of US Highway 101 and the Union Pacific Railroad, is now 50%â€twitter.com/i/web/status/1â€¦NC 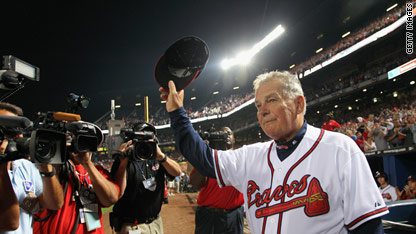 Retiring Atlanta Braves manager Bobby Cox acknowledges the cheers of fans and players after Monday night's game, the last of his career.

After the last out of the ninth inning at Atlanta's Turner Field, fans stood and cheered even though their team had just been eliminated. After chants of "Bob-bee! Bob-bee!" grew to a roar, Cox emerged from the home dugout and took off his cap to acknowledge the crowd.

The Giants stopped their celebration on the infield to turn toward the Braves dugout and applaud Cox, who pointed back at them in a congratulatory gesture."That was nice of them," he said at a postgame news conference.

Cox, 69, made his intention to retire known during spring training, so the entire 2010 baseball season has been a farewell tour for Cox, who was Atlanta's manager for 25 years. In city after city, Cox was honored with gifts and plaques during pregame ceremonies.

Fans started a "Thanks Bobby!" Facebook page, and many wore T-shirts over the weekend bearing that message.

But his focus remained on winning games, using his managerial skill and experience to guide the Braves into the postseason for the 15th time since he took over, despite season-ending injuries to star infielders Chipper Jones and Martin Prado and pitchers Kris Medlen, Jair Jurrjens and Billy Wagner (who also is retiring).

"I'm proud of the team. I told them that a little while ago. They've come a long way, with this team. They played their hearts out, and I'll miss them," said Cox, his voice breaking a little.

See SI.com's complete coverage of Cox and the MLB playoffs.

Jones has been with Cox the longest, ever since Cox - who was then the Braves' general manager - drafted Jones as the top pick in 1990. He told the Atlanta Journal-Constitution about Cox's brief words with the team after Monday's game.

"There wasn't a dry eye in the place," Jones said. "I don't think I've cried in uniform since I was about 8. You spend as much time with Bobby as I have, it's hard. He's been a father figure to me; he's been my only manager. It's hard to swallow that this is going to be the last time."

Cox had 2,149 regular-season wins and 1,709 losses with the Braves, according to baseball-reference.com. He also managed the Toronto Blue Jays for four seasons in the 1980s, going 355-292. He was named manager of the year once in the American League and three times in the National League.

Under his direction, the Braves went from a last-place joke to the perennial team to beat in the National League. They won their division 14 straight years, grabbing five National League pennants and one World Series championship, in 1995.

Cox, who played in the major leagues as a third baseman for just two seasons (1968-69, with the Yankees), was known as a "players' manager." He always defended his players in the press even when he was upset with them, but took care of the matter behind closed doors. More than once a player was defended publicly by Cox, then traded away a short time later.

That tenacity in defending players often placed him between them and umpires on the field. Cox holds a dubious Major League Baseball record for being ejected from 158 regular-season games and three postseason contests.

Baseball is the only sport in which the coach wears the same uniform the players wear. Cox said he'll miss his.

"This doesn't feel like the last time I'll put it on, but it certainly is. And I won't put it on again."

It can be difficult getting your teen to go to sleep, but there are some surprising strategies to help them get enoâ€twitter.com/i/web/status/1â€¦Zp
cnni

2:01 am ET October 17, 2021 RETWEET
The Banksy painting that partially self-destructed at auction three years ago has sold once more, for a staggeringâ€twitter.com/i/web/status/1â€¦uj
cnni

1:01 am ET October 17, 2021 RETWEET
â€œThe missionaries were traveling by vehicle Saturday to Titanyen after visiting an orphanage in the Croix des Bouqutwitter.com/i/web/status/1â€¦nTYo
susancandiotti

12:49 am ET October 17, 2021 RETWEET
â€œUp to 17 missionaries and their family members were taken by gangs in the capital as they were leaving an orphanagtwitter.com/i/web/status/1â€¦yUqi
susancandiotti