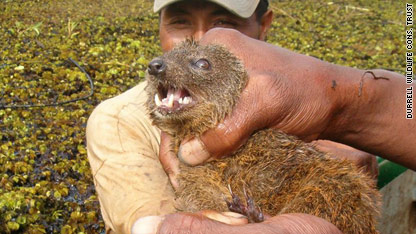 Researchers caught this Durrell's vontsira in 2004 and eventually determined it was an unknown species.

British researchers have identified a previously unknown mammal in Madagascar, and it's already endangered.

Researchers from the Durrell Wildlife Conservation Trust, London's Natural History Museum, Nature Heritage and Conservation International discovered the critter, which eats meat, weighs about 1.5 pounds and is the size of a fox squirrel.

The brown speckled creature lives in the Lac Alaotra wetlands in central eastern Madagascar. Scientists briefly captured one in 2004 and suspected it was a new species. They took detailed photos of it and confirmed that it was different from the brown-tailed vontsira, a mongoose-like animal that also lives in the area, the Durrell Trust stated on its website.

"The future of the species is very uncertain because the Lac Alaotra marshes are extremely threatened by agricultural expansion, burning and invasive plants and fish," said Fidimalala Bruno Ralainasolo, a conservation biologist working for the Durrell Trust who captured the original specimen.

Zoologists named the critter Burrell's vontsira, after the late conservationist Gerald Burrell, founder of the trust, which is dedicated to preserving endangered species. The findings are described in the current issue of the Natural History Museum's taxonomic journal Systematics and Biodiversity.

12:01 am ET August 1, 2021 RETWEET
'The Simpsons' is doing something it's never done. The show will kick off its 33rd season with an all-musical episoâ€twitter.com/i/web/status/1â€¦iE
cnni

6:00 pm ET July 31, 2021 RETWEET
"The animals are on fire." Farmers face devastation in some areas of Turkey as wildfires continue to sweep the counâ€twitter.com/i/web/status/1â€¦RY
CNNweather